As many of our members suspected, the “new” mechanic in XY11Steam Siege is dual-type Pokemon: a Fire- and Water-type Volcanion-EX was just revealed on Pokemon’s Twitter account! Thanks goes to Bangiras and Jake C. for the translation! 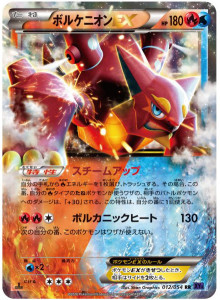 Ability: Steam Up
Once during your turn (before your attack), you may discard 1 Fire Energy card from your hand. If you do, during this turn, the attacks of your Basic Fire Pokemon do 30 more damage to your opponent’s Active Pokemon. 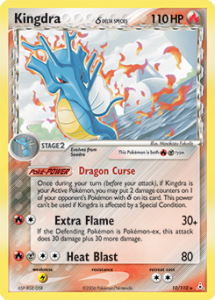 The Ability can be used once per Volcanion-EX per turn. If you have four Volcanion-EX in play and four Fire Energy in your hand, you can add up to 120 damage.

The dual-type mechanic means Volcanion-EX can hit more Pokemon for Weakness (Pokemon weak to Fire or Water) and it can also be affected by cards that target Water or Fire-type Pokemon (like Blacksmith, Splash Energy, Burning Energy, Aurorus, etc.)

This is not the first time the TCG has featured dual-type Pokemon. The first dual-type Pokemon were introduced in EX Team Magma vs. Team Aqua in 2003. They were Team Aqua and Magma Pokemon that were their normal type and Darkness (like Team Aqua’s Kyogre being Water / Darkness). Then later, some Delta Species Pokemon were a certain atypical type and Metal (like Kingdra δ being Fire / Metal). What makes the mechanic different this time around is that the Pokemon can be more than just dual-Darkness or dual-Metal (like Fire / Water).

Who thinks Gardevoir-EX will be Psychic / Fairy?