CoroCoro has revealed shiny M Gardevoir-EX and shiny Azumarill from XY11! Along with Volcanion-EX, they are three of the eight dual-type Pokemon in XY11 Explosive Fighter / Cruel Traitor, which will be named Steam Siege in America. Some of the dual-types will be shiny.

Our translations may be wrong since the scans are blurry – I’ll post a note if we update them. Thanks goes to Jake C. for the translations! 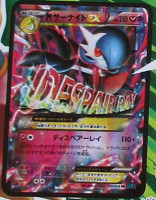 [Y][C] Despair Ray: 110+ damage. Discard as many of your Benched Pokemon as you like (you cruel traitor). This attack does 30 more damage for each Benched Pokemon discarded in this way.