What’s up guys? This is Chris Collins back again for another article. This time around, I wanted to talk about how I personally choose decks to play and why I do so in this manner. Deck choice is one of, if not the main contributor to success in tournaments. This skill is extremely important to learn if you want to get into the competitive scene. In one of my past articles, I talked about a method of “Paper and Practice“, which is more of an advanced technique on deciding which deck to play for a tournament. But what if you have no idea where to start? This article will aim more at explaining which decks you should be picking up and testing. Consistency is a huge key to success in modern decks and wins games on its own, but there is an even deeper layer to consistency and that involves a deck’s synergy. The most successful decks have acquired this trait and it is a key component to winning a tournament.

But What Exactly Do You Mean By Synergy?

The way I define synergy is when key Pokemon involved in the strategy fit together perfectly and form a very straightforward strategy in which you craft your list around. There are decks that consist of over-complicated strategies that can do well, but the very basic strategies will still compete with them while being able to maximize consistency, giving the advantage to the basic strategy.

Some famous examples of this are actually the most recent World Championship winning decks. To start, Jacob Van Wagner was able to pilot Keldeo-EX / Blastoise to a win last year, the year before, Andrew Estrada won with Virizion-EX / Genesect-EX, and before that, Jason Klaczynski won with Darkrai-EX / Sableye. Surprisingly enough, all of these decks had their main Pokemon released in the same set (Boundaries Crossed, Plasma Blast, and Dark Explorers), and this is no coincidence. Even Pokemon itself knew that the pairing of these cards were matches made in heaven, which should be a tell tale sign of consistency. Am I saying that all World-winning strategies have to revolve around the combinations Pokemon provide us? No, but these examples show synergy at its finest.

Probably the most consistent deck in Expanded right now is Yveltal-EX / Darkrai-EX and that deck has taken home four Regional Championship wins this season alone, not counting its success in Europe. I would definitely call this a synergy-intensive deck, the core strategy of the deck does not consist of cards coming from the same set, but pairing these two cards together is what makes a synergistic deck. Decks that get hyped going into a new format just because there are cards that obviously go together should not be simply thrown aside just because it is gaining so called hype, but rather they should be tested and perfected. Those hyped decks may not instantly have success due to it just simply being expected at its first tournaments, but most of those decks will have their moment in the sun and will be executed perfectly. Most of the recent Nationals and World wining archetypes follow this rule.

How to Find Synergy

Now, most of you reading this article are obviously preparing for States, so if we can apply what we’ve learned here, we can find synergistic decks in the very format we are about to compete in. There are some combinations that are not currently viable, Pyroar / Charizard-EX comes to mind. But have no fear! There are legitimate options for States that contain this magic touch. I’ll be talking about each of these decks in depth and how they have synergy so you can have a better idea of how to classify a deck as synergistic.

During Cities, our last legitimate Standard tournaments, Yveltal / Zoroark was the deck that scored the most wins in the Standard format. An argument could absolutely be made that this was only due to its massive amount of play, but the fact that it pumped out the results means this deck of course has something that makes it playable and synergistic. The deck relies on just its sheer potential for damage and the awkward numbers it provides for its opponents. With Yveltal’s tanky 130 HP and resistance to Fighting, this card can become a nuisance for your opponents to deal with. The synergy this deck provides should be fairly obvious and the deck should be in your testing circles for States.

Out of all the decks on this list, I can certainly say I have the most experience with this deck out of all of them. During week one of States, I was able to get 5th place with this deck and it is certainly my favorite deck of this format. It is one of the more skill intensive decks of the format and I just have a lot of history with the big ol’ bird. I went 5-1-1 in the Swiss rounds, losing to a M Sceptile-EX deck piloted by Utah’s very own Brandon Jones and ID’d with Richard Goldsberry, the eventual winner of the tournament, playing Night March. I ended up losing to Trent Orndorff in a mirror match due to some wacky ruling regarding deck checks and just drawing into some bad hands overall. Once I figured out the details of my deck check problem, the judges acted appropriately in turn and the ruling was logical considering the situation. Here was the list I played at the event:

Like most Yveltal lists nowadays, I added in Gallade to help improve some of my otherwise shaky matchups, most notably M Manectric-EX. Also with the new Jolteon-EX in the format, if you want a shot in this matchup, Gallade definitely seems like your best bet. I was convinced by Daniel Altavilla at the last minute to fit in Puzzle of Time, which was definitely a worthy inclusion. With Puzzle of Time you can get back crucial cards, for example Startling Megaphone which helps a ton in the Night March matchup.

Now that Yveltal’s buddy — Darkrai-EX — got rotated, Yveltal’s synergy isn’t as obvious. With cards like Zoroark and Yveltal, Yveltal does have some Dark pals to work with, but it is not as strong as it once was. In the beginning stages of the inclusion of Zoroark at Cities, the deck had a lot of free space and that is usually a key quality in these synergistic decks. The main strategy you ask for doesn’t require much space, leaving room for valuable techs which can win key matchups. That is where the Gallade comes in, it gives you a shot at your M Manectric-EX matchup.

If there was a reason to play Yveltal for States, this would definitely be a good one. This is one of the few decks that can boast a strong on-paper and in-practice matchup against the Florida Regional winning deck. It has type coverage over Trevenant, quite a rare thing to say, and it also takes forever for Trevanant to Knock Out any of Yveltal’s attackers. The exchange is overall favorable for Dark and its attackers can get powered up extremely easily by just simply attaching a Dark to an Yveltal and using Oblivion Wing.

Now, there have been claims that Trevenant can beat Dark decks with the card Bursting Balloon, but I personally have found this statement to be false. A much more noble tech that people have tried is Crushing Hammer, which may buy the Trevenant player a few turns, but as you may see, smart  players will have an even easier time beating Trevenant. The main reason I play three Professor Sycamore isn’t to consistently have draw-power, as that’s rather abundant, but it’s to nullify the Trevenant player’s chances of taking a win off you. All you need to do in this matchup to win is stream Oblivion Wing and eventually Mind Jack with Zoroark for OHKO’s and take the win. The way Trevenant can win a game is if your hand is bone-dry and they can Silent Fear to victory. Having access to multiple Sycamore in a game is crucial in this matchup and should not be overlooked. This deck does base itself off of Items, so you need a consistent way to dispose of those cards you don’t need. This is such a serious issue for the deck, I would even try to fit four Sycamore if you are afraid of Trevenant. 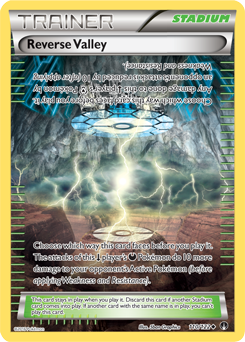 I faced a grand total of four mirror matches at Utah States and only ended up losing to one them. To be quite frank, every single card is needed in this matchup, but some are more crucial than others. While I was playing, I noticed that every single game I had Reverse Valley facing the correct side (where my Dark Pokemon’s attacks to 10 extra damage) I won the game. This was because with Reverse Valley, Zoroark ‘s math on its Mind Jack attack was beautiful. I was able to OHKO two Yveltal-EX while still having a Float Stone on Zoroark because the math works out that them having a full Bench with Reverse Valley facing me ends up hitting exactly 170. If I wanted to ensure this happened every single time I played this deck, I could even play Target Whistle, which would be a brilliant inclusion if you could fit it.

Overall, this deck’s history matches that of the greatest decks of old and will continue to be a driving force in the game until its rotation. That’s what you find with the most synergistic decks, they never go away when they have an amazing pilot behind them. For this reason, this deck reminds me a lot of Luxray GL LV.X / Garchomp C LV.X which was a striving deck all throughout its existence and always required skill to be played to success.