Hello Pokebeach! It’s TheUltimateAbsol here again, and after winning February’s Article Contest – and opening an entire booster box of prize packs – I’m quite worn out as of late. The prize I received was all worth the effort in reward for my article I wrote, but I must say, I’ve never opened a booster box before. In fact, opening 36 packs at once does a lot to change your opinion of the Pokemon Trading Card game. Especially that moment when you find that more than 300 of your cards you pulled are completely unplayable, and that time when you also realized none of your pulls will help you or your decks, and when you see your expensive EX-oriented deck just flail in front of a 30 HP Joltik, and when you find yourself bubbling out of top cut from the resistance game…

There ultimately becomes a time when you become just sick of Pokemon. Sick of opening packs, sick of checking prices, sick of bending over head-over-heels to satisfy the demands of society with their so called “metagame”. You want to get out before your life falls apart. The real question is, How? Most of us are already head deep in the water, spending large chunks of money on staples like Shaymin-EX or VS Seeker. The most logical solution is simply to sell the cards online or give them to a friend, but that will only continue the cycle; one more person’s life will be wasted on this horrendous game as they become the new victim to the growing monster known as “Pokemon”.

Thus, there is only one way to end this: destroy your entire collection of Pokemon Cards. 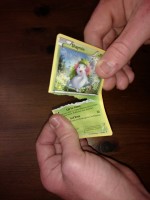 This is by far the most convenient method. It can be performed anywhere any time – all you need is a quick finger motion to change your $50 Shaymins into 5 cent shreds. Do it with your friends, do it with your family, do it with your dog, or do it with a smartphone camera and an entire Facebook group to wacth! You won’t ever be able to stop the ripping because the rip-fever’s just begun!

This fun concept has become so widespread and popular that people have developed games out of the joyful act. “Flip it or Rip it” they call it, a game about fun, luck and nothing about value. Each player buys a booster pack and opens it, but sees nothing of the cards. Then they flip a coin (I prefer the Red Fennekin) to decide the card’s fate before the other side sees even the light of day. If heads, keep it, if tails, destroy it with every ounce of fury left in your body. As a personal bonus round, I end up ripping the rest of the cards anyways so that they may be rid from this world.

Although fun, ripping has a deadly drawback: only one card can be ripped at a time! Have you tried ripping your whole 60 card deck in frustration? It’s simply impossible, unless you’re a Pokemon and have swords for arms. We can’t be simply spending 3 seconds ripping a single card when there’s an entire collection to go through. Thus, that leads me to my next ingenious scheme…

Pokemon cards are made of paper, right? Paper burns when lit on fire, right? Awesome. That means, instead of having to destroy each and every card individually, we can have a fire do all the work for us!

This method is very easy; the only steps required is to ignite one card, and spread it to the rest. Within minutes, you’ll have a blaze of lost hopes and dreams right in front of you! With all the recent cold weather, blizzards, snow-mageddons, and whatever frosts of the Bittercold there may be, you can rely on this flame to keep you and your household nice and toasty during the winter.

Nothing says family more than the occasional card-fire. There, everyone can gather together and discuss various stories of their life, like how they lost at top cut, or how resistance bubbled them out during swiss, or how they opened an entire booster box and only got 4 ultra rares! Even more, nothing tastes better than the good ole’ smores you’ll be making with the heat of burning holofoil.

The light of the burning flame may be beautiful, and colorful too depending on which card is ignited, but for some it simply can be autonomous. If you desire a more entertaining and productive method of disposal, look no further than your own kitchen. 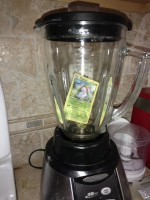 You know those mechanisms called “garbage disposals” you can find in your sink? You know, the tin under your faucet that food will drop down into, and will sometimes occasionally get clogged so you have to stick your hand down there touching arceus-knows-what thinking in the back of your mind “PLEASE DON’T TURN THIS ON”?  Well this is the same principle, except that we won’t be sticking our arms down any drains, and this won’t (hopefully) get clogged.

Take about 20 cards and load them into the glass pitcher portion of your blender. Next, add exactly 1/2 a cup of water. Put on the lid, and set the dial somewhere in between “Smoothie” and “Ice Crush”, but whatever you do, do not go past “Ice Crush”. This would result in an overload in power and within second’s you’ll blow a fuse. Finally, with an arm secured on top of the lid, press “Blend”. Instantaneously a flurry of Black, White, and Blue will overtake the pitcher, and bam! A Pokemon smoothie has been created.

Ah, the classic Pokemon-Card smoothie. I used to drink one every day up until recently, when the doctor told me to lay off. What I don’t get is the doctor; do you know how high these things are in fiber? Fiber is the only true nutrient, at least for the soul. Maybe he was one of those hippies scared of the “artificial colors” found on the ink of the cards. “Lead Paint,” he called it. Anyways, the Pokemon-Card smoothie comes in a wide variety of flavors depending on what cards you blend! Such combinations, named by yours-truly, include:

Maybe you don’t want a smoothie. Maybe you want to use your cards for good…

And what better good is there than fighting crime? I’ve got to tell you, these cards are like ninja stars – you could throw one straight at a target a hundred feet away!

Of course you could take “Throwing” as a way of simply placing your collection into the trash can, but that’s not the focus here. Every card has it’s own potential – from blinding the eyes of your enemies to being used in a pocket-sized game of Frisbee.

In order to accomplish such feats I speak of, you have to focus on the technique. The trick is to hold the card between your index and middle finger at the very corner of the card, and while swinging your arm, let the card slip out of your grasp at a completely flat angle. It is a skill that takes months of practice to perfect; I remember throwing a Bidoof at my garage door at least 46 times every night before finally grasping full control of the throw.

Like the smoothie, certain cards have different qualities when tested by the art of the throw. A Rock/Ground/Fighting-type may provide more impact while a Colorless/Normal/Flying-type may go further a distance. However, the Trainer cards and Energy are not recommended for throwing as a recent scientific study has proven them too light and frail for the average flight. Keep in mind who your enemies are and where they are before selecting ammunition. A distant but humane target should be hit with with something like to a Rayquaza-EX, while you should expend your Primal Groudon-EX only on your closest and  most evil enemies.

Beware though, this method is the least “environmentally safe”; the cards are simply left on the ground to rot. If you have any experience with trying to make compost, say, out of a “Biodegradable” Sun Chips bag, you may know the truth: decomposition doesn’t exist. You could even be fined or perhaps arrested for littering. Who knew Pokemon Cards could be so dangerous?

As Pokemon players, we no longer have to bound ourselves to playing with and collecting cards, for their destruction is just as important of a hobby as the others. We constantly spend big money on mere slips of paper, then brush it off with excuses like “the travel was more expensive,” or “It’s fun”. We play the pack-buying game, in which there is no winners and only losers, but still bitterly act like the holofoil Dragalge pulled made up for the whole 4 dollars of liquid cash spent. And so, to stay consistent, why should this millennial generation care how it gets rid of these cards? Their disposal should be just as fun as their acquisition, right? Fun – that’s what this game is about. We never grow up, we never question our actions, and we never get realistic because we’re stuck in our innocent youth.