What’s up? Chris from the Beach back again for my sophomore article. With Nationals behind us and Worlds swiftly coming into sight, only the best are invited to the tournament and only the truly elite and hard working are able to skip the first day of competition entirely. Fortunately, I am one of those of those people to skip Day One! Barely making the cut at 16th place, I am certainly not the most qualified for this position, but I am so happy it all worked out for me in the end. Looking forward to Worlds, it is key to analyze the meta accordingly and even more important to run a consistent deck with the power to stand up against the best.

In my article today, I will be touching on those topics of metagaming, consistency, and power in your deck and how to utilize them the best you can to reap the benefit of your work. Although some decks seem like the play for the tournament on matchups alone, there is so much more to account for and it requires testing to actually see if the deck is really the best call. I like to call this method “Paper and Practice” hence the title. Rather than just spoon-feeding you lists, we need to know what deck to even work on in the first place. That’s my focus in this article. It works best when you are set on a certain archetype and don’t quite know which variant to play. This method has led to some of my best accomplishments and let me reflect on my mistakes as well, even in tournaments as recent as Nationals. I’m going to show some of the Paper and Practice method’s finest points with the intent to teach you what it’s all about.

I will also be talking about how to metagame for Worlds. I don’t want to spoil too much of it, but there is a lot more behind metagaming for Worlds than any other tournament. I talk more about it in the premium section of my article, so if you’re interested, maybe you should consider getting a premium membership for yourself? Not only do you get full access to all of these articles, but you also get access to the Subscriber’s Hideout. This is where you get advice from our writers at PokeBeach. We only hire some of the best Pokemon Trainers to write for our site, and these same people can also help you with your deck personally and see what is needed for you to step up your game.

Throughout the year, we’ve seen a ton of great players gravitate towards one archetype for the majority of the season (including myself). May this be Seismitoad-EX, Yveltal-EX, or otherwise, these are cards that have plenty of variants orbiting them and let players have different supporting casts depending on the current metagame. Metagaming is mostly a mental process and is usually done without touching a card, but I can’t stress how important it is to actually go out in the field and see if there are holes in the methods behind your madness.

“Chasing the golden goose” as Josh Wittenkeller (commentator for the tournament) put it, Jason Klaczynski finally got his final piece to his long incomplete puzzle. Finally winning a Nationals, he has now won each tournament in the current game at least once (League Challenge, City, State, Regional, National, World). For a long time, Seismitoad-EX / Garbodor was thought to be on the latter side of Toad variants with most decks being able to function under Ability lock. But with the ban of Lysandre's Trump Card, Seismitoad-EX was gonna have to see a change in coat.

An obvious partner to pair Toad with was Crobat since this variant seemed less needing of Lysandre’s Trump Card. It was also a good option, as reliable sources of damage output were hard to come by since you couldn’t recycle Hypnotoxic Laser as easily. Another huge appeal of Toad / Bats was that it gave you more outs to KO cards like Raichu, Hawlucha, and M Manectric-EX which otherwise were a pain to KO. 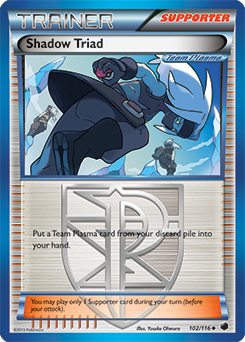 But there was a way to recycle these Lasers: Shadow Triad! This let other variants of Seismitoad besides Crobat still have the aggressive force they need to pull out a game. Being able to recycle Hypnotoxic Laser as well as other resources with Lysandre's Trump Card was a huge reason decks such as Seismitoad-EX / Slurpuff, Seismitoad-EX / Crawdaunt, Seismitoad-EX / Shaymin-EX, and Exeggutor were able to see success. Now with Shadow Triad, we’re able to recycle one of the main resources we were able to before. Most of us either didn’t think of using Shadow Triad in our decks, thought it wasn’t worth the space, or just didn’t play Seismitoad for Nationals. But with VS Seeker, this gave Jason outs to up to eight Lasers a game, a crucial part to his damage output.

Both Seismitoad-EX / Crobat and Seismitoad-EX / Garbodor had great showings at Nationals with Bats taking the most spots in Day Two, and Garb winning the whole thing. So, what let Garbodor put itself over the top? Was it lucky matchups or was it that exaggerated Fennekin coin? It wasn’t either of those, it was more about Jason’s experience with the deck and the deck itself having more outs to a win than Crobat.

Unlike most Crobat variants, Garbodor has been known to have a more disruptive strategy running things such as Crushing Hammer, Xerosic, and Team Flare Grunt. This gives the deck the ability to swing a game right back in their favor in ways that Crobat could not. This let Garbodor be very consistent in its strategy to disrupt its opponent greatly and slowly whittle it down, rather than just locking Items with some more sprinkles of damage. Seismitoad-EX / Garbodor was very versatile in its win conditions while doing so as consistently as possible.

Another key contributing factor behind the success of Seismitoad-EX / Garbodor was the pilot behind the winning list. Jason has had a ton of experience with Seismitoad-EX / Garbodor before this tournament, as early as the deck’s conception. Having such experience with the deck and being known as the GOAT, Jason was able to outsmart his opponents not only by his skill, but by his aura. It’s a theory, but I personally do believe that his previous wins have played a factor in his current wins. Playing a deck that has very even matchups across the board was a perfect choice for him, as he did have an unsung advantage over his opponents.

While Seismitoad-EX / Crobat was the best Toad variant on paper, appearing to have much better matchups against Raichu and M Manectric-EX (two of the biggest decks at the competition), the Garbodor variant was able to take alternate routes to victory while also having one of, if not the best, player in the world to pair with it.

Next, I’m going to go over some more examples of Paper and Practice working to great effect, and show you how to apply this method to your testing and deck choices. It has really helped me do well in recent memory, and with Worlds and a new season just around the corner, this seems like the best time for you to step up your game. Then, I’ll look over the metagame leading into Worlds, give some of my predictions, and teach you how to metagame for Worlds yourself. With only the game’s best players competing in this prestigious tournament, metagaming for it can be quite different than smaller tournaments. You wouldn’t want to be left unprepared for the hardest tournament of the year, would you? Don’t miss out on this chance!