A deck pamphlet Japanese stores give out to customers has revealed Glaceon-EX and M Altaria-EX from XY10 Awakening of Psychic Kings.

Bronzor, Bronzong, and Bronzong BREAK were also listed as appearing in the set, though no pictures were revealed. The character Lass from Base Set will be making an appearance in this set as “Lass’s Recommendation,” a brand new Trainer card. Another new Trainer card is “Fairy Drop.” These cards will likely be revealed in the coming weeks.

Thanks goes to our friend @molmol_poke for the images below, and Jake C. and Michael S. for the translations!

[W][C] Second Bite: 20+ damage. This attack does 10 more damage for each damage counter on your opponent’s Active Pokemon.

[W][C][C] Crystal Ray: 70 damage. During your opponent’s next turn, prevent all damage done to this Pokemon by Evolved Pokemon. 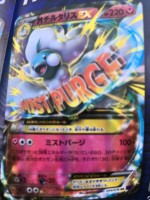 When 1 of your Pokemon becomes a Mega Evolution Pokemon, your turn ends.

[Y][C][C] Mist Purge: 100+ damage. If this Pokemon has any Special Energy attached to it, this attack does 30 more damage and heal 30 damage from each of your Pokemon.