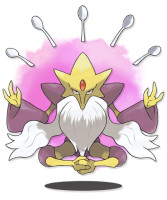 We’ve received exclusive information that the name of America’s next set is Fates Collide! It’ll hit store shelves May 4th. Although it will feature BREAK Pokemon, it seems TPCi has decided to drop the “BREAK” pun from set names quite early into the new block.

Fates Collide will feature Zygarde in its many different Formes, Alakazam-EX, M Alakazam-EX, Altaria-EX, M Altaria-EX, Umbreon-EX, and Lugia BREAK. This means these Pokemon will likely be in Japan’s own XY10 set, Awakening of Psychic Kings, which will be released on March 18th.

There will be over 120 cards in the set, including five Pokemon BREAK, 10 regular Pokemon-EX, and three Mega Evolution Pokemon-EX (Alakazam, Altaria, and an unknown). So there will be 13 Pokemon-EX total.

We should find out more about Japan’s Awakening of the Psychic Kings within the next few weeks. Thanks goes to Andrew for the news!

As a side note, it’s odd to me that Zygarde is being shafted as the star of this set and yet being introduced to the TCG at this specific moment when a “Z” game is potentially on the horizon. Something seems odd about this.