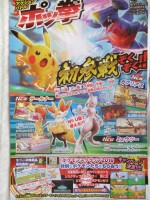 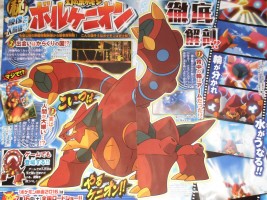 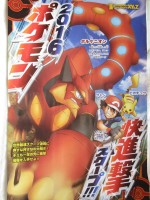 Garchomp, Braixen, and regular Mewtwo will be playable fighters in Pokken Tournament for Wii U. None of them have “ra” in their Japanese names, so Swampert the new Pokemon the Pokken Tournament Twitter promised to reveal on Friday is still waiting behind the curtains.

The Pokemon Scrap campaign is being revived, which is a system that allows players to exchange serial codes on “Scrap” cards included in various Pokemon merchandise and TCG packs for downloadable Pokemon and items. The Master Ball, a shiny Eevee, and Articuno, Zapdos, and Moltres with their Hidden Abilities (Snow Cloak, Static, and Flame Body) will be some of the prizes. The campaign starts on March 1st.

The first details for the Volcanion movie were also revealed. Volcanion is a Pokemon that hates humans. The magazine ponders what happened to it in the past, and mentions it will be fighting with Ash, a human that loves Pokemon. (My personal theory is that it’s Team Flare’s creation, like Mewtwo, so it hates people. Or maybe people “misunderstood” it for being such a weird Pokemon or abused it as a steam-works machine, so it hates everyone back. Either way they’ll find a way to make the reason as boring as possible, so screw it! :p)