Pokemon has officially revealed the rest of the Mythical Pokemon Collections for the first half of 2016! As posted before, a new box will be released each month starting with Mew in February and ending with Meloetta in December. They’ll come with a pin of their featured Pokemon, two Generations packs, and a PTCGO code card. Each box will cost $12.99.

Pokemon also unveiled the rest of the designs for the Generations packs, revealing that each pack will come with 10 cards. However, information about what’s inside of them is still being kept a secret. Update: Just kidding – Generations set info!

The Pokemon Center website will also have an exclusive collection of 20th anniversary Pokemon TCG accessories, including a deck box, playmat, card sleeves, and 3-ring binder. No release date has been confirmed yet. 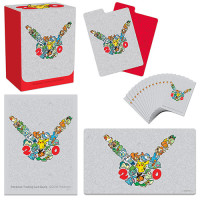