We now have the actual product image for the “Mythical Pokemon Collection – Mew Box.” The one posted earlier today, as noted in the story, was a dummy image. The Mew Box comes with a holo promo of Mew, a Mew pin, two Generations booster packs (showing Charizard and Pikachu in the image below), and a PTCGO card. It’ll be released on February 22nd.

The Mew is brand new. We don’t know it’s promo number yet. All we know about the Generations packs was also posted earlier today. 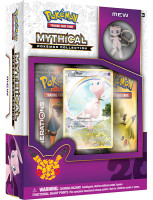 [C] Clairvoyance: Your opponent reveals his or her hand.

[P][C][C] Psychic: 40+ damage. This attack does 10 more damage for each Energy attached to your opponent’s Active Pokemon.