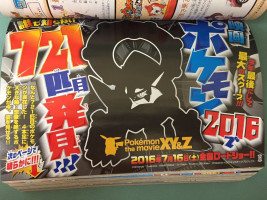 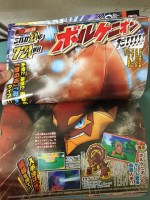 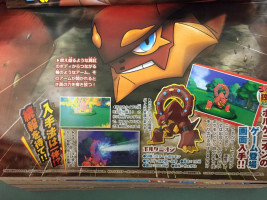 This month’s issue of CoroCoro has revealed the last Mythical Pokemon of this generation, Volcanion, the 721st Pokemon. This was the “big news” they promised in last month’s issue.

Nothing of substance is said about Volcanion besides mentioning that its “arms” contain its true power. The magazine says it will star in next year’s movie, as expected, and that it will be distributed at some point in the future, also as expected.

As we posted here a long time ago, Volcanion is the Steam Pokemon, Fire / Water, 5’07”, and 429.9 lbs. “It expels its internal steam from the arms on its back. It has enough power to blow away a mountain. / It lets out billows of steam and disappears into the dense fog. It’s said to live in mountains where humans do not tread.”

Volcanion’s signature move is Steam Eruption, a special Water-type attack. “The user immerses the target in superheated steam. This may also leave the target with a burn.” It has 110 power and 95 accuracy.

This is all the information you need to know about Volcanion and its lore in the games.