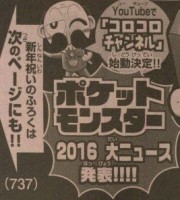 This month’s CoroCoro states that next month’s issue will contain “big news” related to Pokemon in 2016. Much of the time CoroCoro overhypes its statements, so we’re not sure how seriously to take them at their word. But the fact it says the news is for 2016 could imply they’re going to reveal something that will apply to the whole year, which could possibly be a new game.

Next month’s issue will be released on December 15th, so we’ll probably see leaks around the 12th.

December is also when the first details of the next Pokemon movie are revealed, so we’ll undoubtedly see that news in the issue as well (it could even be the “big news”). Will we see Volcanion in 2016’s movie? Zygarde? A Gen 7 Pokemon? Did they decide to put Zygarde in the anime now so they could make room for Volcanion in July 2016’s movie and then do Gen 7 in 2017? What’s going to happen?!