We now have clearer images of the three cards CoroCoro revealed. Thanks goes to Bangiras and Vincent for the translations! 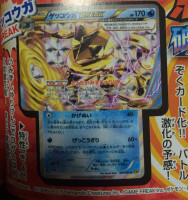 Ability: Giant Water Shurikan
Once during your turn (before your attack), if this Pokemon is your Active Pokemon, you may discard a [W] Energy from your hand. Then, put 6 damage counters on 1 of your opponent’s Pokemon.

[C] Shadow Slip: During your opponent’s next turn, each Pokemon he or she has in play, in his or her hand, and in his or her discard pile has no Abilities (including Pokemon newly brought into play).

[W] Gekko Slash: 60+ damage. You may choose 1 [W] Energy attached to this Pokemon and return it to your hand. If you do, this attack does 20 more damage.

Ability: Aqua Cube
Each of your Pokemon that has any [W] Energy attached to it has no Retreat Cost.