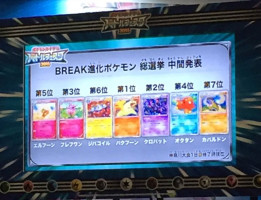 At last weekend’s Battle Festa tournaments in Japan, Pokemon Card Laboratory presented players with seven Pokemon cards and asked them to vote for which Pokemon they’d like to receive a BREAK Evolution. After a full day of voting, the final placements were shown on the tournament’s TV displays, as you can see to the right.

Surveys like this aren’t uncommon for game developers and have happened before in the Pokemon TCG’s past, so it’s likely something real will come out of it.

Will we be seeing Typhlosion BREAK and Crobat BREAK a few sets from now? Could they be released as tournament promo cards instead? We’ll find out soon!

Which Pokemon do you think should receive a BREAK Evolution and why?