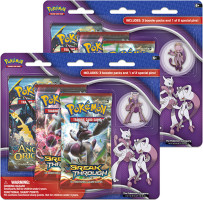 As I posted a few months ago, two “Mega Mewtwo Collections” will be released in America on November 18th! They’ll feature a figure of either Mega Mewtwo X or Y, a holo Mewtwo promo, and four booster packs. The Mewtwo card in the X Collection was revealed last night.

An image of the 3-pack Mega Mewtwo Pin blisters was also revealed. They too will be released November 18th.