Attendees of the European National Championships will be able to download a shiny Larvitar, which will come with Superpower, a move it can only learn from the HeartGold and SoulSilver move tutor, and a Chople Berry, a rare berry that weakens super effective Fighting-type hits. The special download is not confirmed for the U.S. Nationals tournament yet, but there’s no reason to doubt it won’t be. You can view the Euro press release below. 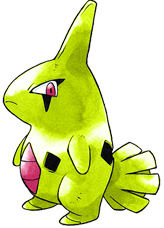 London, UK —February 20th, 2012— The Pokémon Company International today announced that there will be a unique character distribution at the 2012 Pokémon™ Video Game National Championships taking place across Europe during March and April. Attendees will be able to walk away with a rare Shiny Larvitar, a Rock- and Ground-type Pokémon with unusual colouring. Players will need to bring along their copy of the Pokémon Black Version or Pokémon White Version game and their Nintendo DS™, Nintendo DSi™, Nintendo DSi XL™, or Nintendo 3DS™ system to receive this unique distribution.

This Shiny Larvitar knows the powerful Fighting-type move Superpower, which can only be learned in Pokémon HeartGold or Pokémon SoulSilver from a special tutor. It also comes holding a useful Chople Berry, which is difficult to obtain in the games. Larvitar can eventually evolve into Tyranitar, which, thanks to its strong stats and its Ability to kick up an unending Sandstorm, has been a very popular character since its introduction in Pokémon Gold Version and Pokémon Silver Version in 2000.