EDIT: Heerosferret has looked at the Japanese title of the movie in detail and has determined it translates to “To the Conquering of Space-Time.” My Japanese professor confirmed this title as well. So, an event will take place in which Dialga and Palkia are suppressed. I wonder who can do that? Maybe Arceus? :p 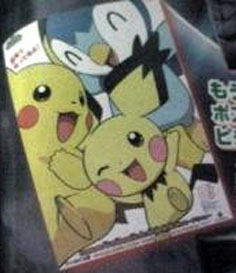 A new image supposedly from the January issue of CoroCoro magazine is floating around Japanese image board 2ch and shows a Pichu with the same type of spiked ear as the silhouetted Pokemon in the screenshot of this news story. Could this be the Pokemon that was hidden behind the question mark? Is it the small, yellow, Electric Pokemon that the director said would save the world? We’ll find out soon!

Additionally, news from the magazine indicates that the 12th Pokemon movie will be tentatively named, “Toward Conquering the Emptiness of Space-Time” “To the Conquering of Space-Time” If Arceus is in the movie, its name may be added to the title at a later time.

Apparently the new CoroCoro issue also reveals that a new Pokemon will be unveiled at Japan’s World Hobby Fair in late January, as well as additional 12th Pokemon movie information. If this is true, then a 5th generation Pokemon will probably be revealed then. This may turn out to be the more important piece of news!

As a teaser, CoroCoro also states that a new Mystery Dungeon series will be revealed in its February issue next month.

We’ll find out more when we have actual scans of CoroCoro, so stay tuned!