Posted 20 seconds after the episode aired! We’re like ninjas!

Heerosferret has written a summary for DP106, “The Way to Befriend a Pokemon.” A couple of significant events take place in the episode. You can read the summary below! 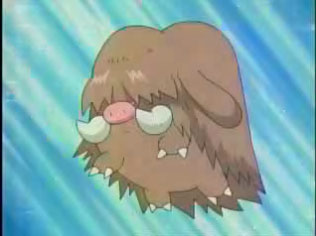 Dawn sees a commercial for the next contest and immediately wants to start training Piloswine for it! While Ash prepares for his battle with Byron, Dawn works on Piloswine, who…. won’t budge or listen to a word she says. It won’t move, or try an Ice Beam, or do anything. But then it digs a hole. Piplup goes down after it, and it beats him up, grinding him against the wall. Why won’t it listen? Brock suggests it must be hungry. When Dawn offers a poffin, it immediately rushes over and starts to eat it up! But when she says there’s no more, it charges angrily at her in a crazy rage! Then it chases everyone around the yard, shooting Ice Beams everywhere. Gliscor begs to help and Ash sends Grotle instead, but the poor thing gets half frozen instantly. Finally, Ash asks Glion to help, but it also gets frozen – only to unfreeze with Fire Fang, which it just learned to everyone’s surprise! Finally, Brock’s Happiny is able to stop the Piloswine by simply holding her hand out against it.

Ash says a battle could maybe help calm it down, and they begin a battle with Piloswine vs. Grotle. Piloswine uses ANCIENT POWER, and rushes off! It comes across Team Rocket about to enjoy a special treat, and Ice Beams the heck out of them. Adding insult to injury, it blasts them off and eats their food.

Dawn is crying because Swinub listened and Piloswine won’t. Ash and Brock try to cheer her up, but she continues to be upset. Team Rocket is spying and gets some amazing idea. After a while they appear in punk disguises raving about an amazing Pokemon Friendly School, and the dummies, er, Ash and company, fall for it and rush over to join it. Jessie greets them and goes on and on about how this school will teach them to be better friends with their Pokemon!

Inside the building is an obstacle course that will obviously make you better friends with whatever Pokemon you go through it with. Ash goes through without an issue with Grotle, and Brock and Croagunk are fine, but Dawn has trouble with Piloswine, who will only follow if she has a poffin. Then it knocks her into the water. Oh well! Outside James has them send out all their Pokemon and claims this is a test to see how close you all are by having to imitate his poses. They all try to imitate James’ poses; naturally Piloswine won’t. Then he has all the trainers go into one circle and all Pokemon into another. Can you guess that the trainers fall into a hole and the Pokemon get caught?

They try to fly off with the Pokemon but its too heavy, and they use rockets to take off in their balloon. As they try to escape, Pachirisu shocks Piloswine, who freaks out and starts to ram into the walls of the cage, eventually crashing the balloon. They all battle and Piloswine EVOLVES, busting everyone out of the cage due to its sheer fatness! Team Rocket tries to attack but it instantly freezes and shoots them away….. THEN CHARGES ASH AND COMPANY IN A RAGE! Piplup tries to hold it off, but gets blasted aside. Dawn manages to return it to its Poke Ball just in time.

Dawn thanks Piplup for trying, and is sad over Mamoswine’s rage, but decides to try her best to train it. And at the Pokemon Center, Nurse Joy tells Ash that Byron has returned…!