Now Heerosferret has written the episode summary for DP105, “Youkan and Rotom!” Some select screenshots of the episode are below the summary.

The gang calls Professor Oak, who compliments their Pokemon and suggests they go get some Forest Jelly while in Canalave. They decide its a good idea, and head out, Team Rocket following. Team Rocket arrives first, picks the lock and heads in, hungry as can be.

Outside Ash and gang are stopped by a worker (who is a repeat character who works in the Oreburgh Mines under the Foreman, Roark – alluding to Roark’s second debut in two episodes?). He warns them that the hotel is haunted by a crazy ghost, but they go anyway.

Ash and company arrive and the door opens for them! Is it really haunted? Pikachu catches a glimpse of something and follows after, but all they find is the toaster oven. When nobody is looking, it turns into Rotom and tries to eat Pikachu, who shocks the heck out of it, also shocking the generator in the kitchen. The electricity turns on in the hotel! And an automatic announcement directs them to a room where they can try out the Forest Jelly.

When they get there, there is a station set up to make your own, and Brock gets very excited and starts to make it! Meanwhile, Team Rocket found some Forest Jelly in a glass cass, but even Meowth’s claws can’t cut it open.

Ash begins training for his Gym Battle, saying Chimchar will be the focus of his training. Chimchar roasts a mower, which turns into Rotom and starts chomping away and chasing Ash and his Pokemon. He runs into the hotel, where Hikari is training for contests. But the fan attacks as Rotom and chases them as well! She runs into Ash and they rush to warn Brock, but Cut Rotom attacks again and chases them up the stairs. But up there is Wash Rotom, who blasts them with water! They escape into an elevator (which luckily can’t turn into a Rotom). BUT SPIN ROTOM ATTACKS AND CHASES AGAIN! They run into the kitchen where Brock is, and yell at him that ghosts are attacking. Brock laughs at him, and pulls his finished Jelly from the fridge. Which turns into Rotom behind his back, then back to normal when he looks. Again. and Again. and Again. Then finally, he spots it, just before they get freeze-blasted out the door!

Then run, but then Heat Rotom attacks! Pilip bubble beats it and it turns into regular Rotom, who giggles and flies away, returning as Cut Rotom and attacking again! Then it flies away, returning and attacking as Wash Rotom, blasting them out the front door. (But Brock is glad the Jelly is still safe). They use their Pokemon to attack back. Finally they manage to defeat it! It comes out in normal form and looks ashamed. They realize it only wanted to play, and it cutely smiles at them, they suddenly shocks them all to have afros, flies into a lamppost and short circuits it, then flies away, leaving them all, well, shocked.

Team Rocket gets into the case to discover its plastic, but Ash and the gang get to enjoy Brock’s handmade Forest jelly, which is so stupendous everyone dances! 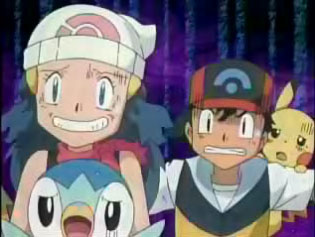 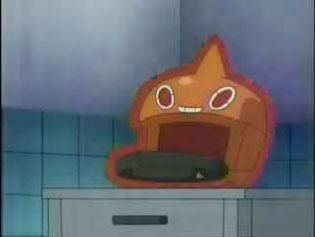 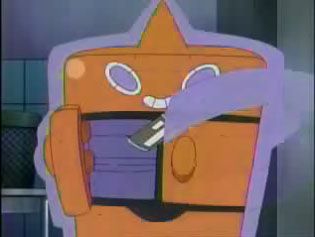 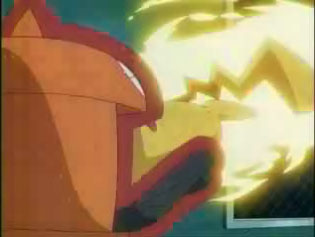 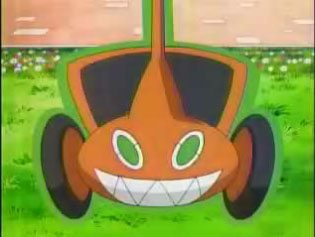 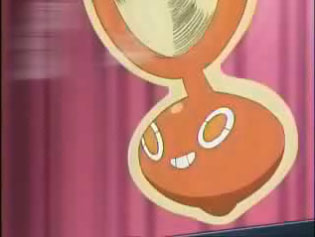 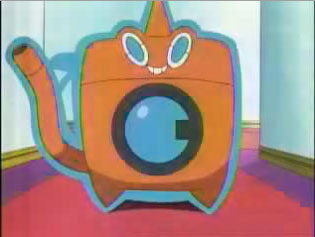 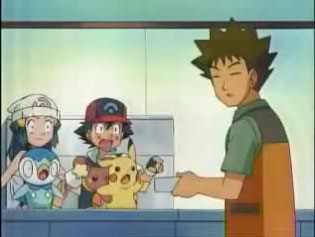 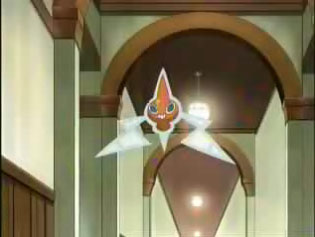 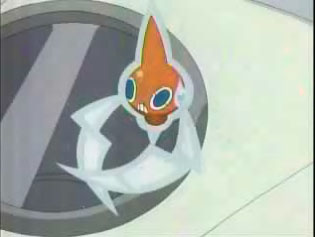 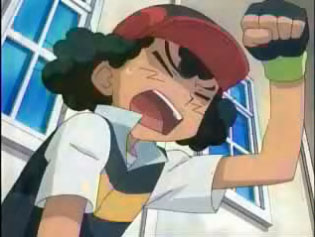