Following the two episodes that aired this week, Pokemon movie director Kunihiko Yuyama stated that the 12th movie title will be revealed on December 13th (next Saturday), along with a “small, yellow” Pokemon. Previously, this Pokemon was identified by the director as an Electric-type that would save the world. In the trailer, it was hidden by a question mark. The Pokemon is probably from the 5th generation, since otherwise, they would not be hiding it. You can see small parts of its head behind the question mark in the video below; it does not appear to resemble any known Pokemon. Could this be the token baby Pokemon of the next generation?

The director also showed a background painting from the movie that appeared to depict Spear Pillar. The subtitles under the painting speculated, “Looks like a god’s palace?!” Other scenes in the trailer showed Dialga, Palkia, and Giratina hovering over a body of water with a spacial phenomenon occurring, which is depicted in front of the three Pokemon in an ancient carving at the very beginning of the trailer. As Ash and crew look on, a light begins to materialize in the sky next to the spacial phenomenon. All three Pokemon fire elemental attacks at it, causing a huge explosion. Could this light be Arceus? We’ll find out soon!

Heerosferret recorded the trailer described above. Click either screenshot below to open the trailer in a new window. Then click the “Play” button to watch it, or click “Stop” when you load the page and wait for it to load. 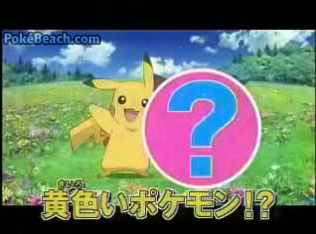 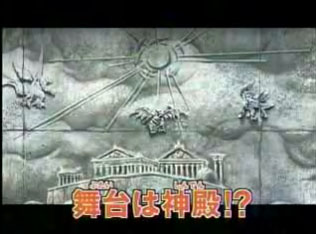