Heerosferret is making me post this, so I am. :)

Even though it is blatantly obvious Arceus will be in the 12th movie, it’s fun to “analyze” the evidence. The only evidence we have so far is from the 12th movie teaser trailer that we posted yesterday. The shot below is of the light that materializes next to the spacial phenomenon, which Dialga, Palkia, and Giratina subsequently fire attacks at. To any seasoned Pokemon fan, it’s probably obvious Arceus would be within this light if it were in the movie. So, let’s examine the light to find clues of Arceus’ existence!

In the light are golden protrusions. Heerosferret has outlined them in a close-up of the light below. The protrusions seemingly resembles the mandala around Arceus, as identified in the third image below. You can see the top two “crosses” of Arceus’ mandala in the screenshot, as well as the four “jewels” that are wrapped in the “crosses.” Are the filmmakers showing us Arceus? What do you think? Post your opinion or analysis! 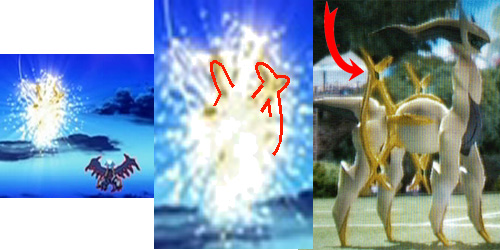 We also have a better screenshot of the hidden Pokemon from the trailer. Looking at the footage from the trailer frame-by-frame, the shot below shows the most distinct feature of the Pokemon. You can see a dark “spiky” protrusion, which may be an ear, a wing, a body part, etc. As stated in the previous news story, this is most likely a 5th generation Pokemon since the filmmakers are going out of their way to hide it. A known Pokemon would not be hidden. Plus, we are way overdue for a future Pokemon based on the pattern in which new Pokemon have been released in the past. So, it’s probably a 5th generation Pokemon (or possibly a new Pokemon forme). 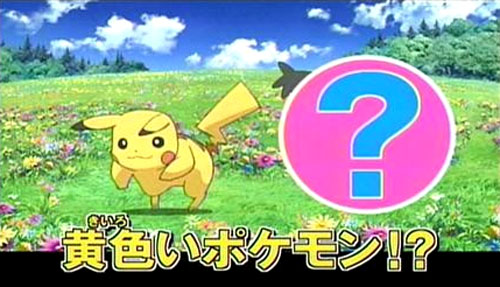