Heerosferret has written a summary for DP104, Cresselia vs. Darkrai. The intro of the episode was revised to change one of Dawn’s Pokemon… her Swinub is to become a Mamoswine soon, as pictured below with other select screenshots from the episode.

Time for a Gym Battle!! Ash rushes to Canalave Gym, a towering building with steel beams, and literally screams for a battle. Nobody answers, but after a moment there is a loud scream. A blue haired muscular man emerges, rubbing his eyes and saying he overslept. Ash angrily demands a battle, but the man says Byron is on Iron Island. Ash looks completely depressed and asks why this always happens to him lately. Then the man falls asleep and wakes up a second later from a nightmare. What’s going on?

They go into town, which is completely silent, and head for the police station to see what’s up. Jenny is asleep too! When she finally wakes up, she explains this is Darkrai’s fault. Darkrai comes every year and causes nightmares for the folks on the island, so they run away to different islands. Usually Cresselia comes to stop him, but this year he’s come too early, and Cresselia isn’t showing up yet. Jenny bought a lunar wing to keep the nightmares away, but it’s not working. Dawn has her lunar wing she got in Alamos Town, and shows it to Jenny, while Brock realizes the feather Jenny has is just a Pidgey wing that’s been painted.

Natural it’s Team Rocket fooling everyone – and they to go to arrest them right away. They also have giant shadows under their eyes and sleepily do their motto. They claim its a machine they’ve created that’s been giving everyone nightmares, not Darkrai. Pikachu blows them up, and they assume things will be normal from now on.

But! That night, Ash falls into a nightmare, and everyone wakes up at the same time at the same time from nightmares. They decide to go to Half Moon Island, followed by Team Rocket, who wants to catch Cresselia. They find a brand new shining Lunar Wing, and Brock guesses Cresselia recently dropped it. Piplup tries to sniff out Cresselia, but only finds a Psyduck. Swinub picks up the scent instead, and they chase after it as it leaps up cliffs until they reach Cresselia’s nest.

Cresselia descends and Team Rocket immediately attempts to catch her, shooting a net up from their sub, catching her and climbing up the cliff to her with spider legs on their sub. They catch everyone in nets and try to make off with Pikachu, who manages to shock Ash somehow. Swinub begins the attack! Ramming into their sub over and over again and badly hurting itself. Dawn screams at it to stop, but right when it seems hopeless, it evolves into Piloswine and sends them flying.

They free Cresselia and beg her to vanquish Darkrai, and off she flies to Canalave City. The gang follows close behind, and Darkrai appears. They realize that Team Rocket’s machine is what disturbed Darkrai out of sleep. The battle begins! And ends after one minute with Darkrai sinking back into the ground with a groan. Cresselia flies off and all is well. 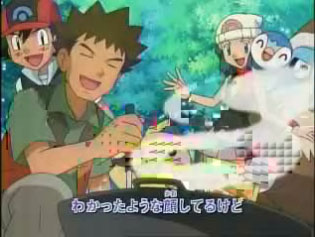 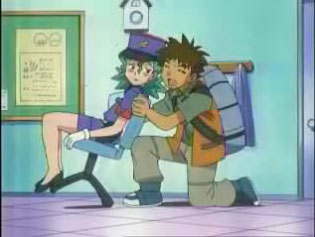 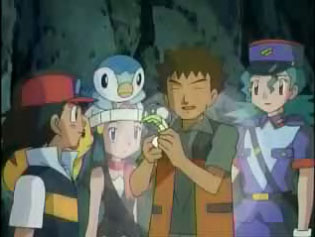 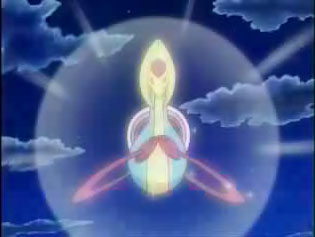 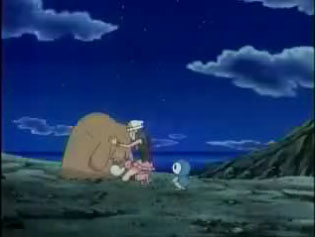 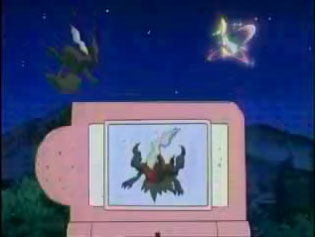