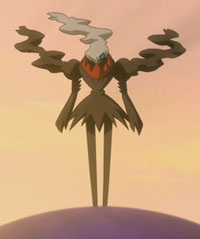 Like I would ever let this site die. If you read the very first news story ever posted here, which was written on July 15th, 2003 (the summer between 8th grade and freshman year of high school):

Just so you all know, I will never abandon this site like many Pokémon webmasters have done in the past, and have major plans for it in the future.

And it’s as simple as that. I am too obsessed with Pokemon to give up on it now or ever. I started this site when I was 14 (and now I am 19), and it will continue through college and whatever future frontiers there are. It dies when Pokemon dies.

So what was that April 1st post really all about? For one, I was really going through “moving Hell” in trying to move to my new host. I was on the phone, in chat rooms, on AIM, and writing e-mails for over six hours each day to both hosts so that I could get everything moved and running, and both were giving me major trouble in some shape or form. Even though the situation was terrible enough, I did embellish it a little (in regards to myself, not any of the facts I actually posted).

What was “embellished” was the fact that I was depicting myself as depressed and not wanting to continue. I would not care if the whole site is deleted – I would still work it back up to normal. In fact, about a year into this website’s original creation, it was completely deleted by our free host. I still continued with it, obviously. I also lied in the story about my grades falling to add legitimacy to what I said about me considering to quit. I actually received straight A’s this past quarter, and even the quarter before, with the exception of one B+. While Pokemon may affect my school work sometimes and how late I go to bed, it doesn’t affect me overall, and I keep a good balance going between everything (including family and the few close friends I have). Again, I would never give up this site or abandon it. I said it five years ago, and I will continue to say it in the future.

In terms of the backup failure, I did backup the entire site before moving to the new host, but my laptop crashed (like always :/) and needed to be wiped clean. Once I got it back, I backed up all of my files again, but for whatever reason (perhaps because of exhaustion with this whole move), I did not realize the backup was incomplete and did not even include the databases that hold all of the forum and “new website” information. In thinking I had a complete backup and that the new host would move my files over from the old host safely (being two insurances that the data was safe), I could not have anticipated that BOTH would fail. They obviously did.

In the end (details aside), I lost all of the pages I made under the new layout (by the way, you’re on it). As I had been saying for over a year, I was making a new layout and new content. That is why many of the old pages were not being updated (like the theme deck section, card scans, and menus), since new versions of all of them would be up eventually.

Unfortunately, because I lost all of the pages I created, I have to re-write everything from scratch, and basically, there is no content on the site currently. I will have to gradually add pages as time goes, and hopefully people who I know will help me so the process goes much faster. Early next week, I will re-post all of the card scans again, and hopefully a few pages.

As for the forum database, my old host did send it to me after a few phone calls, begging, and yelling, but swore they had nothing else saved (which would be the “new website” content). So, the forums were saved. For the new layout, I had shown it to so many people for their opinions during this entire ordeal that it was saved in their cache, so I was able to salvage that as well. It’s just too bad I could not get any of the pages back that I originally wrote, but I suppose that once I start rewriting them and adding them to the site, people will be introduced to the content we have and can offer feedback. At least it will give people something to look forward to when visiting here, since in the past, all we offered was news and did not really ever add content (most of the content was stored in the news stories). Now, that will change – we will have pages for everything!

The new layout was not ready to go up yet, and neither was the new system I am using, but I suppose the circumstances have pushed me to put them up early. I will still be working on the layout over the next few days, so please bear with me (especially if you are using Internet Explorer 6). Right now, no links work except for the main page and forums.

Because I thought people would not believe the part about me wanting to quit (since I thought I came across to everyone as an obsessed and dedicated webmaster), I was not really expecting any “sympathy” e-mails from anyone, but was I surprised or what?! I mean, I was probably going to get a couple, which is why I lied about my grades (to see if people would be unselfish and understanding in me wanting to quit for my own life), but I received over 150 e-mails, and truly appreciated every single one of them. Almost no one was selfish about my “apparent decision” in quitting – everyone understood that because of all of this trouble, I should take a break and that I am indeed a human who should put his life before Pokemon. I truly, truly appreciated people placing my own well-being over their pleasure in visiting this site, which is what I was trying to gauge in saying my grades were falling (and I sure am glad I did this – I also hope no one was offended by my lying). I know now that I am spending all of this time on this website for people who are actually compassionate, and if I ever actually am going through hard times with my life and this site (which actually has happened before), I will always think of those e-mails. Many of them really touched my heart (how cheesy, haha, but it’s true), and many make me want to do this even more!

Thank you everyone! Although this place is a mess right now, please give me some more time!