No news was good news? 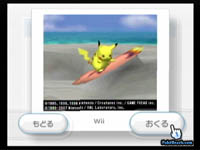 More Details on Pokemon Snap – Nintendo has sent out a press release stating that Pokemon Snap will be available for download via the Wii Shop Channel on December 4th in Japan. While the game will remain almost exactly the same as the N64 version, an added feature will be the ability to save pictures you take to the Wii Message Board, which you can then send to your friends. The Wii remote will not be used to play the game (no “point and shoot”), but will rather require the Wii Classic Controller to play like most Virtual Console games (if you do not have this controller, you will not be able to play it). The United States download date is still unknown, but it will probably be released soon, perhaps right after Japan gets it. Click the thumbnail to the right for a larger image. Again, the game will cost 1000 Wii points, which is the equivalent to ten dollars. For more pictures and videos of Snap on the Wii, you can check out the official Japanese Pokemon website.

Porygon-Z Lv.X – Porygon-Z Lv.X, a card we first reported on back in the beginning of October, has finally been revealed! Click the thumbnail below for a larger scan (courtesy of Toho) and look below this paragraph for translations (courtesy of Vincent). The card is available in the Japanese Moon Hunting / Night Dashing picture book, similar to how Garchomp Lv.X was released in the Mystery of the Lakes / Shining Darkness picture book. The book itself costs 750 yen and was released today (November 30th) in Japan. Since Garchomp hasn’t even been released in America yet, don’t expect to see Porygon-Z anytime soon.

Poke-Power: Crush Mode
You may use this Power when you play this card into play to Level-Up a Pokemon. Discard all special energy cards attached to your opponent’s Pokemon.
Poke-Power: Decode
Once during your turn (before you attack), you may choose up to 2 cards from your deck. After shuffling your deck, put the 2 cards on the top of your deck in any order you want. This power stops working when this Pokemon is affected by a Special Condition.

Pokemon Platinum? – Beckett Pokemon Collector, an unofficial Pokemon magazine, reports in their latest issue the existence of a new Pokemon game entitled Pokemon Platinum, which is apparently set for release in 2009. A scan of part of the article can be seen to the right, courtesy of Nagrom. I have also reproduced the article’s text below:

… The first one will be Pokemon Mystery Dungeon 2 for the Nintendo DS. This game is currently available in Japan. However, Nintendo is planning on releasing this game in America in the Spring of 2008. / There are two more games scheduled as well. They include a new Ranger DS game due in the Fall of 2008 and a Pokemon Platinum release in the Spring of 2009.

While this news seems exciting, it may not turn out to be true, seeing as it comes from an unofficial source who rarely reveals new games first. Beckett has also printed news from random people on random forums in the past, and has sometimes proven to be unreliable when it comes to new information on future games (when it comes to other things, they are extremely reliable, though!). We will have to wait and see if this turns out to be true, but right now we can consider it a “rumor” until Nintendo or another source reveals new information (if there is any to reveal, that is). If this is true, could Pokemon Platinum be the Yellow / Crystal / Emerald of Diamond and Pearl (although D/P/P would be odd)? A Gold and Silver remake (since platinum is a metal)? A new game entirely? Only time will tell!