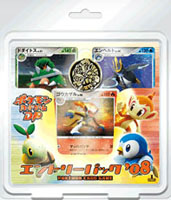 The purpose of an entry pack is to teach new players how to play the Pokemon TCG, similar to the trainer kits we have in America. Entry Pack 2008 contains all new Pokemon cards, unlike the first entry pack released in Japan, which only contained Diamond and Pearl cards. The standard Entry Pack 2008 contains Empoleon, Infernape, and Torterra 30-card half-decks for around $20.00, while the “deluxe” version, Entry Pack 2008 DX, contains an additional Raichu half-deck for around $30.00 (at this time, we do not have the translations for the Raichu deck). How these cards will be released in America is currently unknown, but we can probably guess that they will be included in a future set.

Notable cards from the pack include Empoleon (100 for 3 energy?!), Infernape (120 for 3 discarded energy and even more damage for more energy – like Rayquaza ex?!), and Rotom (2 free energy attachments for no energy?!). Judge them as you will!

Pokemon Snap on Wii’s Virtual Console Soon? – The Virtual Console is a feature on the Wii that allows people to play classic Nintendo games downloaded through the Wii Shop Channel, and when it was first announced, Pokemon Snap was on the list of games that would eventually be released for download. According to Tego, who attended a recent Japanese Winter Challenge TCG tournament (the tournaments where you get the Leafeon and Glaceon promos), Pokemon Snap was on demo for TCG players to play via the Virtual Console, as shown in this photo. This is probably a strong indication that Snap will be available for download soon, since according to Tego, it was advertised heavily at the tournament.

When can we expect its release? Hopefully soon, perhaps even within the next month due to how recently it was demo’d in public. As with most N64 games released through the Wii Shop Channel, Pokemon Snap will probably cost 1000 Wii points (or $10). We’ll bring you more information once we hear anything!

Cresselia and Eevee Promos – Bangiras has also translated the Cresselia and Eevee promos posted in the previous update (they are not very good). Both will be given out at Toys “R” Us stores in Japan from November 22nd to December 20th through a “Pokemon DE Bingo Campaign.” To receive the promos, a person will need to get a bingo card from the Toys “R” Us “Big Toy Book,” which will tell you categories of items you can buy (such as booster packs, toys, or games). Every time you buy one of the items, your card will be stamped. If the first row of your card is completely stamped (which contains three columns, meaning you bought three items), you will receive the Eevee promo. Once your second row is full, you will receive the holo Cresselia. Three rows will award you a Chimchar coin, the fourth row will get you a Darkrai figure, and completing the whole card will entitle you to a gift certificate.

[C] Future Sight: Look at the top 5 cards of either player’s deck, then return them to the top of that deck in any order.
[P][P][C] Healing Light: 40 damage. Remove 1 damage counter from each of your Pokemon.

[.] Gnaw: 10 damage.
[C] Sand-Attack: If the Defending Pokemon attacks during your opponent’s next turn, your opponent flips a coin. If tails, the attack does nothing.