New card review tomorrow, and maybe a different type of review, too!

DP4 Page Update – More [DP4: Moon Hunting / Night Dashing] news today! The two Electivire and Magmortar 30-card theme deck lists are now posted in the [theme decks] section on our DP4 page. The missing Trainer cards from yesterday’s set list are also now included in the [main set list] section. In terms of card translations, Bangiras has translated two Trainer cards in the set: Amulet Coin and Leftovers, and you can view their complete translations and images under our [translations] section. Like yesterday, please do not copy and paste these translations on to any other site – you can use the link above to reference them instead. Thank you. :)

Gardevoir and Meowth in SSBB – This may be old news to some, but a Super Smash Bros. Brawl video posted on IGN revealed that Gardevoir is a Poke Ball item Pokemon. When Gardevoir is released from its Poke Ball, it walks around with a barrier around it, and it appears that the person who releases it is protected from other characters temporarily as long as they stay in the barrier (it is hard to tell what the barrier does in the video, so this may not be an accurate description). You can view a screenshot of Gardevoir below. 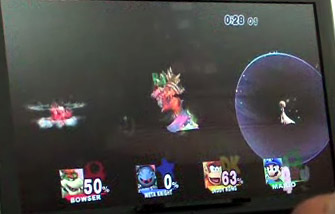 Meowth has been revealed as a Poke Ball item Pokemon on the official Super Smash Bros. website today. It shoots Japanese yen / coins at its opponents using its Pay Day attack, which actually deals some decent damage. Meowth was in the original Super Smash Brothers, but did not return in Melee, so now we get him again in Poke Balls! Click the pictures below for larger images.