Shining Darkness Update – As we reported over two months ago, the third Diamond and Pearl set (following Mystery of the Lakes, the second D/P set) will be named Shining Darkness, featuring Darkrai. To recap from our April news story on the set, “It will be released on July 5th in Japan, with the pre-constructed theme decks featuring Dialga Lv.X and Palkia Lv.X. It will also contain many legendary Pokemon, including Entei, Suicune, Raikou, Lugia, Ho-Oh, and Mew, as well as the Charizard, Blastoise, and Venusaur evolutionary lines.” Today, the official Japanese TCG website updated with pictures of the Lv.X’s that will be featured in the theme decks, Dialga and Palkia (however, no other new information was revealed about the set). The website also promises that every single Pokemon from every generation will be represented on at least one card by the fifth Diamond and Pearl set, although with Kadabra having been gone from the TCG since [Skyridge], the statement may not hold true (although you never know, since it does say “EVERY” Pokemon). You can also download wallpaper celebrating the set (which is pictured in the second thumbnail below) by saving the link under the thumbnail that corresponds to your screen resolution. More info should be coming out next month on the set, so stay tuned to PokeBeach! 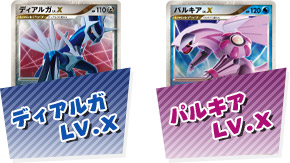 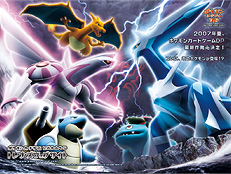