New Strategist Articles! – We have reformed our Strategist program, and now have teams of three people working on INVALID CARD SHORTCODE every week. This way, there are multiple viewpoints given on a card (with one voice, not three), providing a comprehensive review on cards for intermediate to newer players to read. Since I was busy studying for finals last week, I did not have the opportunity to post any reviews our Card Strategists created, so we have two new reviews available for reading today! A new card review will be posted about every other day, except for this week, in which we will catch up with the reviews already written. 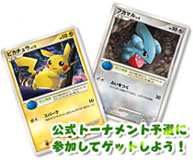 Pokemon Tool Cards – This news is about four days old, but again, I did not have the chance to post it last week because of finals. In Japan at the Spring Battle Road tournament, participants will receive a Pikachu and Fukamaru promo card (seen to the right – click for a larger image). As shown, the cards have built in “Pokemon Tools,” which, as we described a few weeks ago, activate when certain conditions are met. The tools on the cards appear to be Oran Berry, although we cannot be certain since the images are too small. Although nothing is known about these cards or what the Pokemon Tool built in to them are, judging by the handheld Pokemon games, the berries (if they are berries) will most likely activate when, say, Pikachu’s HP is 30 or below, just like in the games when berries activate when a Pokemon’s HP is low or it is affected by a Special Condition. Again, this is not for certain and is an educated assumption, but hopefully, we will find new information within the next few weeks concerning both these new types of cards and the next set, Mystery of the Lakes.