My punctuality is failing this weekend. I am sooo tired, so I am going to have to put off the photos for just one more day (there’s a lot of them and I don’t have the energy to download, edit, and upload them all). Check back tomorrow, as I will have some more info too! 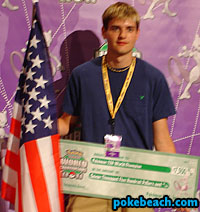 Worlds 15+ Winner: Jason Klaczynski, and General Report – Beating his final opponent twice in a row, Jason Klaczynski took Worlds and the title of World Champion earlier today. He was playing a MewTric deck, and seemed to have an easy time playing it in his last match. In his top 16 match, he went all the way to the clock against his opponent, but was still able to pull through and move on to the top 8, where he faced an American player and defeated him. His friend, Matt Moss, could be heard from far distances cheering for Jason both before and after his final match, as did many other people (although not as loud :p – shows how energetic some people are when supporting their friends). As for new decks in the top 16 today, there did not seem to be any, except maybe a Banette ex deck that a couple of players were using. Jeremy Maron, who won Worlds last year, came in third place overall with a Nidoqueen / Houndoom deck (an update to his Worlds-winning deck last year, Nidoqueen / Pidgeot / Milotic). Pretty awesome to get into the top 4 twice in a row! His opponent in the top 8 was a Japanese player, and although I did not watch the match the entire time, I believe his opponent misplayed towards the end, which cost him the match and allowed Jeremy to win and move on. I felt sorry for the guy – he seemed to be in shock when he lost because of his misplay and was extremely sad. And of course, in the end, Jason Klaczynski was able to defeat Jimmy Ballard, with an 11-2 record, allowing him to claim the title of World Champion. Great job everyone, and congratulations Mr. Klaczynski! 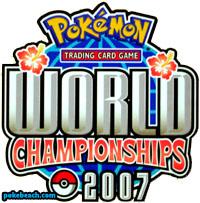 Worlds 2007 – Invitation Only? – The following has not been confirmed and could be completely wrong, although I am positive that at least the first two points are correct. :p I have heard many rumors floating around among professors, players, and judges for the past few months regarding next year’s Worlds, and today it was confirmed to me again by even more people. What has been said almost by everyone I have ever talked to is that (a) there will be no open Grinders for entering Worlds next year, and (b) Worlds will be invite-only. I have also heard, though not as frequently, that (a) only sixteen 15+ players from America will go to Worlds next year, and that (b) the “Grinders” to get into Worlds will be Nationals, which will also be an invitation-only event (which you get invited to from winning a lower, premiere event, and accumulating points from winning premier events – I think, basically, that the higher you place at premiere events, the more points you receive, and then you get invited to Nationals to compete for entrance into Worlds if you meet the requirement – not too sure on this part). If any of this is true, it looks as if POP is trying to make Worlds harder to get into so that it has tougher competition and so that it is more exclusive to the best-of-the-best. I am sure we will hear something soon regarding the above if it is indeed true, so stay tuned and try to win everything you can (although there isn’t too much going on between now and November, is there?).

POP 4 So Far – Today more POP 4 cards were revealed. Click the links below to see what was seen from both today and yesterday. I’ll post the booster pack image tomorrow. The images are sort of blurry because of my camera not knowing how to focus correctly, but you can read the card text at least.