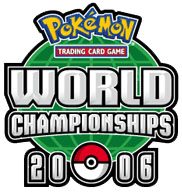 I left my camera in Porygon’s car, so I don’t have my pictures of POP 4 cards and other stuff. I’ll post them tomorrow – again x 2. Worlds had so many people today it wasn’t even funny (I put several new scratches on my laptop from bumping into people – but I guess I should had brought it’s case). The cheese for cheeseburgers at the restaurant there was also very expensive – 2 whole bucks! :p

POP 4 – In order to obtain a POP 4 booster currently, you must defeat Tsug. Yamato at Worlds (he has his own table set up by POP where people can line up to play him, and it they win, they receive a POP 4 pack :p). So far, I believe only three to four people have beaten him, two being kids. But anyways, the POP 4 packs have Deoxys on the cover, and so far, from what I saw, there will be Pidgey, Squirtle, Treecko, and Pikachu in the boosters (apparently Deoxys too). Tomorrow, I am going to hover around the table where people are playing him, and if someone beats him, I’ll ask them if I can take a picture of their cards and post them here (I already got the pictures of the four cards mentioned above). Thanks goes to BenLugia for running up to me with a POP 4 booster pack wrapper from the trash, telling me of where I could find them. :p

Mew to be Given Away at Toys R Us – Mew will be given to Pokemon fans all across the United States on September 30th to celebrate the release of the Lucario movie and Mystery Dungeon games. All you have to do is go to a Toys R Us (locations to be announced later) on September 30th with your Ruby, Sapphire, Emerald, FireRed, or LeafGreen game cartridge and a Game Boy Advance. Apparently, there will be two varieties of Mew – either a Mew with Special Attack moves (with Ice Beam and Thunderbolt), or one who specializes in regular Attack moves (Earthquake, Explosion, Shadow Ball). More info later as we approach this date. Now if they would only give Deoxys to us outside of Texas…

Diamond and Pearl Set – I was talking to PCL (Pokemon Card Laboratory – the creators of cards) for so long at Worlds that I eventually ended up running out of Pokemon things to talk about and had to pull out some Miyazaki movies (the Japanese Disney – famous for Totoro, Laputa, Nausicaa, etc.). *ANIME SPOILER* We were even arguing about whether or not Latios and Lucario really died, with them shouting and laughing “Pokemon do not die (even though the games acknowledge that Pokemon die in Lavender Town)!” *END SPOILER* They were cool. Anyways, from what I was able to learn from them, the Diamond and Pearl set is supposed to come out around October, although they said it’s not final yet. They also said that they were not yet finished with the set (whether they meant printing the set or working on the actual set, I do not know), although they were coming close. I tried to ask them some stuff about new Pokemon, but they wouldn’t tell me anything. :( Oh well.

Aobasu – PCL Thinks it is Fake – This is not fact, just a second opinion. I showed PCL all of the Diamond and Pearl Pokemon we know thus far, and then I showed them Aobasu (the supposed grass starter’s evolution). They were naming all of the Diamond and Pearl Pokemon off the top of their head (and correcting me as I mispronounced them), but when they got to Aobasu, they stopped and started talking to each other. I thought to myself “Oh boy, it’s fake, isn’t it?” I then proceeded to ask one of them if it was fake, and they basically said “I don’t know for sure, but I have never seen it before.” I asked another and he said “I don’t know.” Then the third guy told me “It looks fake to me.” That could just mean that they have not yet been shown the Pokemon, or they do not want me to know it is real, but it’s pretty interesting on how they knew all of the others and were naming them, even when some of them had been released very recently. Remember, their opinion is not official at this point, and do not take it as fact yet – it’s just an interesting point to mention.

Abra and Kadabra – Not on Cards for an Unknown, Real Reason – I must have walked all over the entire room asking PCL members about why Abra and Kadabra do not have cards yet (in the EX blocks), showing them the Japanese text for their names so they knew who I was talking about. None of them really knew until I talked to the last girl. When I asked her, she said she knew what I was talking about, and that they knew they had not made them into cards yet. When I asked her WHY they were not made into cards, she laughed and said she could not tell. I asked if it was because of a magician (the Yuri Gueller guy or whatever his name was who got mad over Kadabra), but she did not know what I was talking about (probably because I messed up the guy’s name), so I asked again, and she made a “my lips are zipped motion” and laughed (so giggly these Japanese fellows are). I had talked to her before about different Pokemon-related topics, and she had never tried to hide anything from me, but when it came to this particular topic, she zipped her mouth (literally). So, I suppose there is a reason why they never made them into cards, since she did acknowledge that they knew they had not made them (which means they did not just forget about them), but that reason is still unclear, and most likely will never be revealed to us – unless I get it out of one of them tomorrow. :p