EDIT #1: I have added the release date for Pokemon Ranger to the right menu. 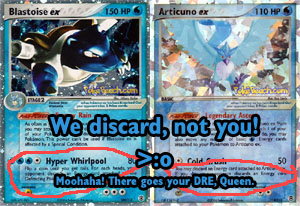 Wal-Mart to Celebrate Launch of EX CG – Going to miss a pre-release? Wynaut go celebrate the launch of EX Crystal Guardians at Wal-Mart?

Come on in to your local Wal-Mart store between 10 a.m. and noon on Saturday, August 26th, to celebrate the launch of the exclusive PokeÌmon Trading Card Game EX Crystal Guardians “Earth Shower” theme deck! To celebrate at participating stores, we’ll be offering demos of how to play the PokeÌmon TCG, as well as handing out 2-card promo packs and cool PokeÌmon activity books while supplies last!

The first thing I noticed when reading this article was that they are calling one of the EX Crystal Guardians theme decks “Earth Shower.” As we know from the images I posted here on July 17th, the two theme deck names were “Storm Surge” and “Green Cyclone,” so what could this new theme deck be? A combination of the two? A brand new one exclusive to Wal-Mart? I suppose we will find out soon. To check if your local Wal-Mart will be promoting this event, click here.