Fake Pokemon or the New Starters? – The below Pokemon are being classified as FAKE (guilty until proven innocent), so do not assume they are real yet. This image comes from an unknown source, and by the looks of it, the image seems to be fake. Bangiras did translate the names, which are right next to the Pokemon’s corresponding Japanese text, but even she thinks the image is a fake. Recently, many Japanese fans have been creating fake Pokemon, so it’s not out of the realm of possibility for these three Pokemon to be forged (they like to trick stupid English peoples with their fake Pokemon). :p Most likely, I will edit this story later saying “EDIT #1: Yep, the Pokemon below were fake,” but you never know what could happen. They do appear to be of the Fighting, Darkness, and Psychic types just by looking at their coloring, which would correspond with what was said on the Pokemon Diamond and Pearl Yahoo site the other day, so you never know if they could be real or not. I will update this later when we find out more information. 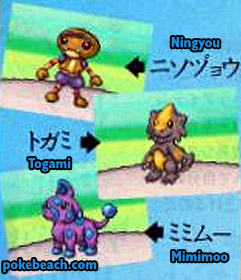