EDIT #5: Corrected some info in the attacks / abilities section and added a few pieces of missed information from the last translation.

EDIT #4: The “Upcoming Dates and Events” section in the right menu has been updated with two new dates – for the Lucario movie in America, and for D/P in Japan.

EDIT #3: Bangiras has finished translating every single piece of textual information from the CoroCoro magazine pages (which are towards the bottom of this news story for viewing). All of the info was double-checked, so it is more than likely 99.9% accurate. We now have ALL of the info! I suggest re-reading most of this news story if you came here earlier today.

EDIT #2: Added info regarding the Manaphy movie and both legendary D/P Pokemon.

Sorry for not posting this stuff earlier. I had to wake up early to do an essay and then I had to go to summer school (one day left, btw!).

New Diamond and Pearl Pokemon – The first one is grass, the second one is electric, and the third one is Darkness/Poison. I spent about two hours re-doing the images in Photoshop and editing them, so if you steal them, I will kill you (joking… but be sure to give credit if you use them). 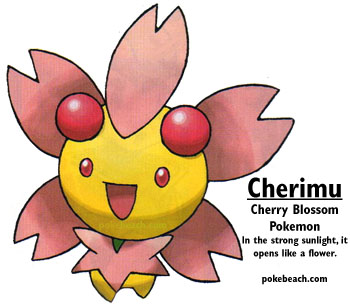 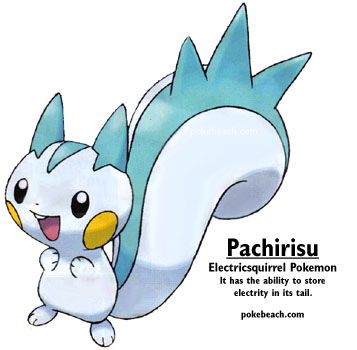 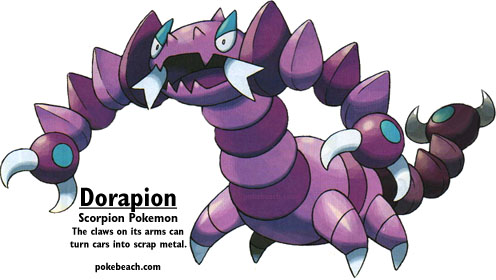 The Three Pokemon
Okay. So. Another Pikachu rip-off. As if Plusle, Minun, and Pichu weren’t enough. It’s asking to be road kill! Actually, I think it’s pretty cool. All three Pokemon above are actually the first Pokemon you encounter in the game (not the starter Pokemon, as some websites misinterpreted). The scorpion guy looks like he could be an evolution of Gligar, but since we know that WPM can never predict anything, he probably will not be.

The Legendary Pokemon
The Kyogre and Groudon of Diamond and Pearl are Diaruga and Parukia, which are “God Pokemon.” Yeah, like we are going to remember those names in a few days without having to look them up. Think of it like this – Diaruga is the Diamond one because it starts with a “D,” while Parukia is the Pearl one because it starts with a “P.” To remember their actual names, think of Diaruga = diarrhea, with “rug” at the end, and Parukia = paprika. Diaruga has control over time. whille Parukia has control over space. Together, they control the space-time continuum.

The Games
Now for the actual games. The games will be released on September 28th for around $40.00 in Japan. One of the evil teams in the game is Team Galaxy (might be named Team Astro when it comes to the US), obviously related to Parukia, while the other team’s name has not been revealed yet (there might not even be another team, though). You can trade and battle through wireless play or over the internet with both games. When reserving your game in Japan, you will get either a Diaruga or Perukia figurine, or another secret Pokemon figurine that we do not know about yet (Manaphy? Totally new Pokemon?).

Your Rival
The main character and rival have had the same goal since they were little, and that the rival is very rash and easily confused. The rival says to you “The fine for making me wait for you is 10,000,000p.”

Diaruga and Parukia in Manaphy Movie
Both will appear in the intro of the Manaphy movie, but will not be involved with the actual plot. Advanced images of Diamond and Pearl will be shown in the beginning of the movie as well.

Lucario’s Gender
Lucario is a male in the games, not genderless. This could mean either (a) we could have a Latios/Latias case on our hands, or (b) Lucario is not a legendary (yeah, right). More than likely, they just decided to make him a male just because (maybe because he is a male in the movie?)

Their Names
Also, please take this important note. The above names are NOT the official spellings (romanizations) of the Pokemon. They are more than likely to change, especially the Cherry Blossom and Electricsquirrel Pokemon (whatever their names are – how am I supposed to remember?). So, these are only temporary. Once the spellings are revealed to us by the Japanese, use those spellings (as in, do not say Rukario or Buizeru – say Lucario and Buoysel). It’s funny, though. A lot of these recent Japanese names seem to be more related to English than anything. Perhaps a lot of these Diamond and Pearl Pokemon will keep the same names when they come out in English (such as Buoysel, Tamanta, Perap, and Manaphy – just my opinion, though). 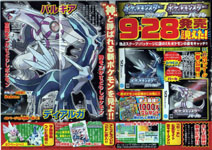 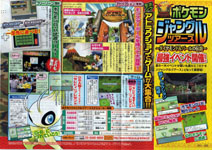 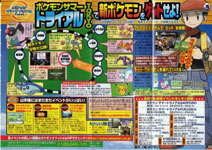