Few more days until I get another new modem!

Pokemon Battle Revolution (Wii) – The newest Pokemon game coming out in Japan will be Pokemon Battle Revolution for the Nintendo Wii, which will be released sometime in 2007, several months after Diamond and Pearl are released. It will be the Stadium / Colosseum / XD of Diamond and Pearl, and will obviously feature improved graphics, including updated Pokemon models (even for R/S Pokemon!). Pokemon actually make physical contact with each other and their attacks interact with the arena as well! It’s about time we had interaction like this! Pokemon Battle Revolution will also be able to link up to Diamond and Pearl through the Nintendo DS. Click the screenshot below to watch a pre-release video of the game (if it doesn’t open or does not play correctly, right click the image and save the link to your computer to watch the video). 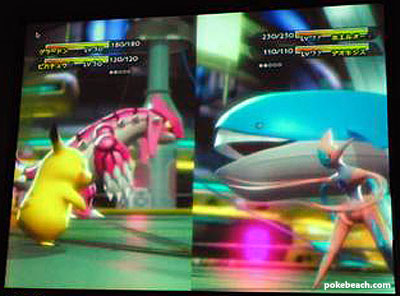