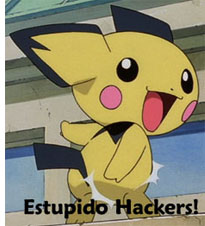 Skip this if you don’t want to read a long story. So last night, I couldn’t sleep. I got on to my laptop around 2 AM, and decided that I wanted to backup the forums, site, and my computer. I backed up the site first, then moved on to the forums, and then started to burn everything off of my computer to a DVD disc. Mind you, I had never backed up the forums before, and did not know how, so I spend about 30 minutes reading on how to do it, then took another 20 minutes to back it up. Exactly three minutes after backing up the forum, I refresh the page, and some hacker message pops up from some dudes in Turkey. o_O First I thought it was a joke, then after typing the site into Google, I find out they have been targeting myBB forums all over the net (they discovered a security flaw and exploited it – they even hacked into Firefox’s forum!). They had hacked into the Admin Control Panel and basically took control of the forum, made a mess of it, and then redirected the site to their own. At that point, I was extremely tired, so I went to bed, woke up to about forty e-mails from people telling me about it, then I went to summer school. Later on, NeoGreatFox and Arty2 tried to help me restore my forums, but nothing was working – none of the fixes the makers of the forum were telling me to do were working either! Luckily, I had that one backup, uploaded it, and everything worked again! Then I upgraded the forum so that people could never do it again. So yeah, that’s my story for today! :p Funny how the ONE time that I backup the forums, and exactly THREE minutes after finishing backing it up, people hack into it and wreck it. If I didn’t have that backup, we would had lost everything.

I was going to post this yesterday, but I did not got the chance to do so:

* Unleash the power of favorite Pokémon as new Pokémon Delta Species!
* 10 new Pokémon-ex, including 1 Pokémon-ex Delta Species! (which we know is Sceptile)
* Discover mysterious crystals that will change how Pokémon Trainers do battle!
* Expand your strategy by collecting all 100 cards!
* Complete a collection of holographic parallel set!

So all we really learn from the above description is that there will be 10 EXs in the set. And with 10 EXs, as well as Alakazam* and Celebi *, I doubt we will get the Eeveelution *’s that we have been wanting for a while now. That would be seventeen ultra-rare cards (10 EXs, 7 *’s), and that’s too much for one set. When will we ever get them? POP4?