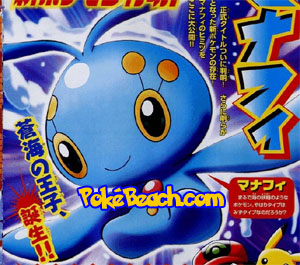 NEW POKEMON! – This image was just posted on the net, and I was just able to get it from someone. We are not sure where it originated from, but I will credit whoever posted it on the net when we discover who uploaded it.

Vincent has translated the name of this Pokemon to be “Manafi.” This Pokemon will appear in the 9th Pokemon movie featuring Kyogre, “Pokemon Ranger and the Prince of the Sea,” and is in fact “the prince of the sea.” It kind of looks like the Jirachi/Mew/Celebi of Diamond and Pearl. More info later, and I will be editing this news story as we get new info.

The large version of this Pokemon and other Pokemon can be seen by [clicking here].

EDIT: Okay, let’s examine the full-blown picture of [Manafi and other Diamond and Pearl Pokemon]. First off, we can see that there are three Pokemon shadows below the three Manafi pictures. The first one reminds me of a Mantine (pre-evo?) or a fish, the second one reminds me of an Eeveelution or something related to Flaafy, and the third looks like an evolved Flying Pokemon either holding a flag, having a sharp weapon on its head, or as the magazine describes, it could be a Pokemon shaped as a musical note. Not much to discuss about those three.

So, going on to Manafi, I will bet 100 dollars that it is the Jirachi/Celebi/Mew of Diamond/Pearl. All three of those Pokemon are small and cute, which seems to be the trend with those Pokemon. Not to mention, this Pokemon will appear in the 9th Pokemon movie – Pokemon Ranger and the Prince of the Sea (with probably Manafi at the end of the title). Similar to Jirachi being sealed in a crystal cocoon, it looks like Manafi will be sealed in a pearl-like egg thing. Also notice how May is holding the egg. Max was the star of Jirachi, who was in a cocoon, so maybe May will be the star of the 9th movie, with Manafi and its egg-thing. Maybe Kyogre is protecting it from something, like an evil Pokemon Ranger?

Manafi also looks like a water type to me, simply because its blue, is in the ocean, will be in the 9th movie involving the ocean, and because the magazine says so!

According to the magazine, it is one other type as well, but it is not revealed to us. It might be Psychic. Manafi also reminds me of a water fairy / sprite.

Also, Manafi kind of looks like [Chao] from the Sonic games.

You can discuss [Manafi] on [our forums].