Weeeeee! An update everyday for over a week! It feels like summer of 2003! 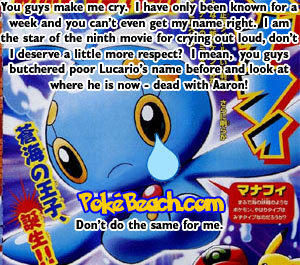 Diamond and Pearl Names – I am still seeing confusion and misinformation regarding Manaphy’s name, so I might as well show you guys the proof from the Japanese trademark database.

Those are the images posted in the trademark database regarding those Pokemon’s official Japanese romanized names. Although there are many, many ways to spell Japanese names, the above images are the official spellings of those Pokemon. Please point other people to this information. It’s not Manafi. It’s not Rukario. As we have seen with all legendary Pokemon of the past (excluding Freezer, Thunder, and Fire), legendary Pokemon keep their same Japanese spellings in America. Thus, one can conclude that Manaphy will be Manaphy in America, just as we said with Lucario. The other Pokemon listed above, however, will most likely have their names changed in America.

Also, I would like to mention that it has been reported to me twice that Manene (Mr. Mime’s pre-evo) will have “Mime” and “Jr.” in its name. This information is not confirmed, and could be totally wrong, so do not hold it to heart completely yet. Dubbing of Lucario and the Mystery of Mew should be finished by now, as Veronica Taylor, voice of Ash, finished dubbing the movie a few weeks ago, so the movie should be coming to us in a while and we should know the official names soon.

One more thing! The person who trademarked Manaphy’s name also trademarked Tamanta (possible Mantine pre-evo), Buizeru, and Perappu, and since Manaphy was revealed to us in CoroCoro along with three shadows, one can assume that those are their names, ESPECIALLY since the first shadow looks so much like a baby Mantine and it’s name is similar to Mantine’s name. More on this later. For now, if you see anyone posting Manafi or Rukario (kind of late now for Rukario, but some people still are calling it that!), please refer them to this post. Misinformation causes confusion and leads people to pointing fingers at Nintendo when their precious Rukario turns out to be named Lucario (as I saw on a certain green forum).

PokePark Website Opened – The official Pokemon Park website has opened! Doesn’t seem like there is any new news on the PokeParks, but we will keep you posted!

Strategists Needed – PokeBeach is looking for people who can write featured articles on cards and card strategies, and people who can write Card of the Every-Other Days. We are mainly hoping to get a few dedicated people for the jobs that will not just write two or three articles and then disappear forever. We also do not want people who, how do you say… ummm…, people who do not… suck? stink? seriously lack! in the trading card game and that will just state the obvious in their articles. We want people who do well at tournaments, who come up with deck ideas, who can play a deck well and help out others (grammar and spelling is also a plus). If you think you are great at the game and will have time to write one or two articles a week, or 3 or 4 card reviews each week, please sign up in this forum thread. Please supply your first name or online name, e-mail, and AIM/MSN/Yahoo IM address in your post.