Delta Scans FINALLY Up
Only took about two months.

These scans are courtesy of Blizzard, who kindly scanned and sent them to me. He originally sent them to me a long, long time ago, but it was one of those periods in school where you barely could get any sleep because of all of the homework, so I kind of had no time to work on them. Then my laptop got wiped out when I spilled water on it, which made me lose all of the scans, and Blizzard had to move to a new house, so he could not send them to me while I was on my temporary computer. He sent them to me again yesterday, I edited them today, and [here you go]. Thanks again Blizzard! 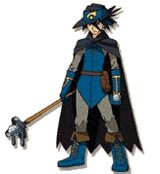 Mew / Lucario OST #2
The piece of music today is titled “Aaron.” Aaron is Lucario’s master in the Mew movie, and can be seen to the right. There are two “Aaron” songs, each completely different, so I will post the one I like better for now.

Lucario’s English Name – Confirmed AGAIN!
Gosh, people are still saying “Rukario.” Remember how several months ago I had a Nintendo source confirm to me that it was “Lucario?” Well, recently, I had ANOTHER Nintendo source re-confirm it to me, IN PERSON, EYE TO EYE. The person verbally said to be “Loo-car-e-o,” which I would think is spelled “Lucario,” especially after our first source spelled it out for us as “Lucario.” I obviously cannot reveal much on the person, or I will get them in trouble, so that’s all I am going to say about the source. If you have any doubts, just think about our track record: We are a reliable source, aren’t we? You can trust your friendly PokeBeach site, we’ve proven over and over again that we have valid information, wouldn’t you agree? I think you can trust us with the name of a Pokemon. Also, I would like to say that just because a certain Pokemon website calls it “Rukario” without any sort of official word DOES NOT mean that is what its name is. Specifically, I am referring to SPP, who has caused the majority of Lucario’s name confusion.

I don’t like to go around bashing people, but when we posted what Lucario’s English name was, Serebii, the webmaster of SPP, deleted or locked every post and thread on his forum in which a person posted that Lucario’s name was Lucario. When someone posted a thread asking him why he was doing this, he had some stupid excuse that I do not even remember for why he was deleting the threads. Then when people began to question his actions even more, he deleted the thread they were complaining in! That’s always his tactic when it comes to another website having something before he does, or someone proving him wrong – he deletes any posts that brings up his wrongs and goes on his merry way, just because he can never debate about anything. Then when I talked to him on AIM after he attempted to hide Lucario’s English name, what I basically got out of him was “You can’t post the info, only I can, so any instance of someone mentioning the news on Lucario will be deleted.” Of course he didn’t directly say that, but that’s basically what he meant. Sorry to go into bashing/rambling mode about this, but I just don’t like how certain people try to hide genuine information from the public and go on to allude the public into believing other false information, especially when it is over jealousy, AND ON PURPOSE. It’s not right, and it just confuses people even more than they need to be. So, I had to say that so that you guys would know that SPP is not right in this case. Further proof: Even if you spell the name backwards, it’s Oiracul, which is like Oracle, which is what Lucario is sealed inside of in the movie. Several Pokemon items in Japan spell it as “LUCARIO.” “Rukario” was never an official name for it, it was simply what people romanized it to in English. Although the movie’s site did name one of it’s files “Rukario.gif” once, it was the only instance in which an official site called it “Rukario.” Every other time its name has been “LUCARIO.” So, in short, I would like to ask you guys to spread the word that Lucario’s name is Lucario, not Rukario, so that people are clear on the name and do not get confused by certain sites who purposely name it wrong because they did not have the information first. Better to learn its name now anyways, since we could be getting 100 new Pokemon soon in which you have to remember all of their names.