Alright, let’s get this show on the road! Yesterday I got my laptop back from the repair shop, and now I can update again at home (since I was only able to update at school before, which barely gave me any time to do anything substantial). Sooo, the inactivity period is now over, and you can all come back now!

A new product for the Pokemon TCG is going to be released on to the market soon, and it will be called the “Deluxe Gift Set.” I first saw this when I went to Gencon on Saturday, and apparently, it will be coming out sometime next week. Anyways, the gift box will contain (1) an EX FireRed and LeafGreen, EX Team Rocket Returns, EX Unseen Forces, and EX Delta Species booster pack (a total of four boosters for those of us who cannot count), (2) a special edition deck box (for your decks and cards) featuring either Articuno, Zapdos, or Moltres depending on which gift box you choose, (3) a holofoil promo Suicune (a holo reprint of the original Wizards of the Coast promo), and (4) an index card matching the theme of your box. Click the thumbnail on the right for a larger image of the gift box, which features Zapdos (the other two feature Articuno and Moltres). These will retail for around $15.00, and will be found at your local Target, Wal-Mart, and other TCG shops that carry Pokemon TCG products.

Also coming out soon is the new EX Value Pack, which will include one EX Deoxys, EX Hidden Legends, and EX Sandstorm (yes, the not-allowed Sandstorm) booster pack, for a total of three packs. The highlight of this product will be the holofoil promo Celebi that is included with it, which, as with the Deluxe Gift Set, is a reprint of the old Wizards of the Coast promo, but holo. Click the thumbnail on the right to see a larger image of the EX Value Pack. The EX Value Pack will retail for around $10.00, and will be coming out very soon.

Japan Mew / Lucario Gift Box
As we reported a few weeks ago, Japan will be getting a second Mew and Lucario gift box. The contents of this box have an extremely high chance of being apart of EX Legend Maker, the next American EX set, so our man Vincent has translated several cards from the tin. The tin includes the cards in the translations below, and other cards that we do not know as of yet. Thanks Vincent for translating! 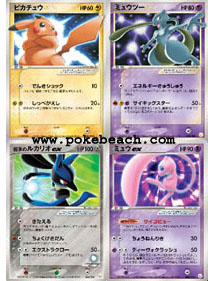 [C] Thundershock – 10: Flip a coin. If heads, the Defending Pokemon is now Paralyzed.
[LL] Revenge – 20+: If you have only one prize card left, this attack does 20 damage plus 50 more damage.

[C] Energy Absorption: Choose an energy card from the discard pile and attach it to Mewtwo *.
[RLP] Psychic Star 50+: If the Defending Pokemon is an Evolved Pokemon, discard all energy attached to Mewtwo * and this attack does 50 damage plus 50 more damage.

Poke-Power: Psycho View
Once during your turn, if Mew is on your bench, you may look at your opponent’s hand.

[CC] Super Psy – 30
[PCC] Devo Crash – 50: You may discard two energy attached to Mew. If you do, remove the highest evolution stage from the Defending Pokemon (this counts as devolving that Pokemon). Your opponent shuffles it into his or deck.

Poke-Power: Splash Return
Once during your turn (before you attack), if your opponent has four or more Benched Pokemon, you may choose one of them and return it and all cards attached to it to your opponent’s hand.

[C] Forge – Attach a [F] or [M] energy card from your hand to Legend’s Lucario.
[FC] Critical Ball – Choose one of your opponent’s Pokemon. This attack does 30 damage to that Pokemon (don’t apply Weakness and Resistance for Benched Pokemon).
[MCC] Extra Claw – 50+: If the Defending Pokemon is a Pokemon-ex, this attack does 50 damage plus 20 more damage.

Note: Legend’s Lucario ex is an owner’s Pokemon, and will probably never be released in America or any other country except Japan.

That’s it for today – I will have at least one more update by the end of the week! Everyone have a Happy Thanksgiving, for those of you that live in America, and be sure to not choke on the turkey, or to spill any water, or to microwave a holofoil Pokemon card, AND to watch the Pikachu balloon in the Macy’s Day Parade on television or in person!

Oh, also, that poem-thingy I posted the other day does have to do with the site, and people who have emailed me have not gotten the interpretation even remotely correct to what it is trying to say. So, if you think you know what it is, e-mail me and I’ll post your name as finding out first. It will be a long-needed surprise for this site.