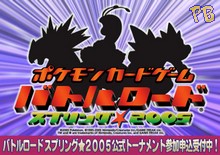 According to vincent0906 from the PokeGym, a new EX set involving Feraligatr, Meganium, and Typhlosion will be released on March 11th in Japan, and it is believed to be named EX Gold and Silver. Seeing as how many Gold and Silver Pokemon have not been released in any EX sets yet, this would be the perfect opportunity to have them featured in one. While information on this set is still a bit sketchy, we will bring you the latest info as soon as it becomes available. Further evidence to show that this set will be coming out and that it will be featuring Gold and Silver Pokemon is shown on the official Pokemon TCG Japanese website, where a banner for Battle Road 2005 (seen to the right) is shown. The banner has a background which clearly displays the shadows of the three Stage 2 evolutions of the Gold and Silver starters, which definitely foreshadows the coming of this yet. It is clear that the next EX set will be EX Gold and Silver, and let’s all hope that all of our old favorites from the Neo sets, such as Riptide Feraligatr, are remade again. :)

Pokemon Center NY Remodeling
The Pokemon Center in New York will be getting a facelift over the course of several weeks. The remodeling of the Center will improve it and allow it to showcase more exclusive Nintendo products. For more information on the remodeling, you can visit the notice on the official Pokemon website by [clicking here].