Member
Hey guys I'm here to talk about your first shiny, if you haven't caught one then say what one you want to get in the future and maybe someone can help trade one to you if you want

I remember my first. It was 8 days after getting Ruby version (first Pokemon game)... A wild Bagon appered then it shined and was another color. so i got curious and threw 15 ultraballs then I threw one pokeball (I said "this is my last pokeball please i want you") rock, rock, rock........Click!

I've caught a total of over 200 shinies easily (some on purpose) so as it says below (signature) before even the movie of "Zoroark Master of Illusions" I loved Zorua, favorite Pokemon, and recently my latest shiny was Shiny Zorua in ORAS only of a chain of 2 and I wasn't even trying to get shiny just one with 3 EVS and eggmoves so guess what I got it I was so happy!!!

Member
I've had no interest in collecting shinies, but I have encountered some random ones. The first (personally) was a shiny Shinx in Pearl, and I've found a couple ones in the friend safari (Minccino & Growlithe). Also found two shinies on my friends Gameboy (Gold Version). One of them was a Hoothoot, but I can't remember the second one.

My favorite shinies are Yanma and Carvanha. I think their color schemes are incredibly cool when shiny 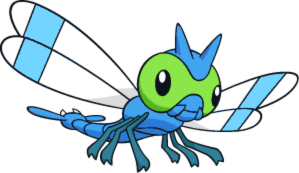 Member
I'll get you one if you want, tell me what things you want on it Nature, EVs, IVs, eggmoves, ect.
ill try and get you one BTW it will be at level one I'm good at getting shinys. (I'll do it free of charge)

I think it was an Oddish that I encountered in Ruby's Safari Zone, but that was over a decade ago so my mind's a little hazy. I do remember I caught a shiny Wingull three days later, though.

Forum Mod
Member
First shiny Pokemon I'v caught was Tentacool. It was at the Lapras cave in Pokemon Gold a lot before lake of rage, so I am probably one of the few players to have their first shiny not a Gyarados lol.

Member
My first shiny [that wasn't a red Gyarados] was a Weedle in FR.

I was looking for a Pikachu in Viridian forest, and it had been 2 whole hours. [A LOT of looking] and I got tired, so I was leaving the forest out the other end, and a shiny Weedle shows up!

Advanced Member
Member
The first shiny I caught was a Tentacool, probably because half the Hoenn region is situated across water XD

Member
I got a shiny Geodude, and traded it for a totally jacked Garchomp.

Member
My first shiny was either a Buizel on Diamond or an Onix in FireRed that I named Goldie because I am a genius. I didn't know what shinies were at the time, but I remember thinking it was pretty cool that I had run across some alternate colored Pokemon. I ended up restarting those save files, though lol.

Member
Well, the first Shiny I've EVER encountered in any game was Shiny Chansey! This was in Pokémon Gold (I think) before I even knew what Shinies were. I was surprised and really wanted to catch it, but I only had seven Poké-/Great/Ultra Ball. I never caught it!

The first Shiny I caught, without even looking for it, was Shiny Oddish. It was in Heart Gold, in Route 5, south of Cerulean City.

And, lastly, the first Pokémon I caught through active chaining, was Meditite, in Platinum. That happened in Route 211, west of Celestic Town. Met it and caught it after only 2 tries... After that I caught a lot of Shinies in Platinum.

After that I haven't even seen any Shiny, apart from those I was given in-game or through trading...
Last edited: May 16, 2015

Member
well today there are 4 different Pokemon that have a 100% chance of being a Shiny (two you must capture)
1st: as everyone know Lake of Rage's Gyarados
2nd: Dratini OR Gabite, after beating the areas in black city/White Forest (B2W2) you get it from Alder's son in Floccesy Town. Its giving to you.


3rd: Haxorus: At the Nature Preserve-The Nature Preserve is a far away area from Unova, accessible only by plane when you have received the License item. This sanctuary is relatively untouched by human hands and has numerous Pokémon species that do not dwell within Unova. Deep inside the forest part of it, you will find a Shiny Haxorus.

Member
I think the first Shiny Pokémon I ever caught was a Tailow in Pokémon Ruby, but this was years ago so I'm not too sure
For favourites - I don't really know. I guess Shiny Fletchling would be one, but that's a given... I'm sure one will come along though!

Knight of Nature and Pokémon

Member
My first shiny was a Ryhorn in LeafGreen's Safari Zone. Not only it has the honor of being the first shiny but also being in the Safari Zone makes it a more prized one. That said, and since my main interest in shinies is due to their colour scheme, my favorites are a shiny Carvanha caught in Emerald after fishing for a Feebas a whole day (back then I didn't knew the tiles availability) and a shiny Zubat caught in HeartGold's Safari Zone. All my shinies are vintage because they were found by sheer luck and not using the PkRadar nor found in a game with better changes of finding them and I love them for that.

Member
My first Shiny was a Sigilyph I got from Wonder Trade. The first shiny I didn't get from a trade was a Corsola I caught while fishing. What makes it even cooler was the fact that I wasn't even trying to chain fish, I was just trying to find a Gorebyss!

Advanced Member
Member
Aside from the standard in-game ones, my first (and only) caught shiny was a Tentacool that I found in Soul Silver. :3 I was surfing somewhere and almost didn't notice it was shiny at first then I did a double take, thankfully before I killed it. >_> Favourite is probably Dratini or Espeon because I love the colour schemes. :3

Member
Other than the Weedle, I've randomly ran into a shiny Flabébé on route 4 [The coolest part was I was having a really bad day up until that point] and a Shiny Tranquill in the friend safari while I was just running around in circles testing the theory that the friend safari has a higher chance of yeilding a shiny. I guess it worked! Flabébé is currently a Floette, and Tranquill is now an unfezant. Seeing as it's so hard to tell the difference with Flabébé, you get a picture of Floette instead.

Member
The first shiny I ever encountered was a shiny Hoothoot in Crystal. I had no idea what shinies were, and I thought my game had glitched or something. I debated running away from it because I was worried it would ruin my game, or catching it in case it was special. I decided to catch it. It was very early on in the game, so well before meeting the red Gyarados.
By the time I did reach the red Gyarados and it did the little sparkle thing, I remembered the Hoothoot (who I left in the box) and figured it was something special. That was years and years ago. It took me until the DPPt era to figure out exactly what shinies were xD
Since then, I've filled the entire Crystal Pokédex except for Raikou, and every now and then I'll pick up my GBC to go Raikou hunting. During a Raikou hunt, I ran across a shiny Tangela. I named it Tanawesome because creativity.

As for my favourite shiny Pokémon...well, I looooooove the shiny Goomy line! I like a lot of other shinies too, but I'd say my favourite is Goodra.

Member
without counting red Gyarados......my 1st shiny was in Pokémon Silver and was a wooper and that time already know about shiny Pokémon

it was night that time and i was passing a road that i can not remember when another stupid Pokémon (i wasn't used a repel that time) but when the wooper shows up and the flashes shined i think : debo tenerlo YA!!!!!(translation: i must get NOW) i don't remember with which ball i caught it but i got it

Member
Woah! I was playing Alpha Sapphire and going through victory road, and a shiny medicham appears! But....

As for favourites, I've always been partial to the Teal-blue coloured ones like Gardevoir, Medicham, Gallade, etc.

Forum Mod
Advanced Member
Member
My first shiny [that was not the Lake of Rage Gyarados] was a Bronzor in Wayward Cave in Pearl. I was trying to catch myself a Gible for my team (caught one; but I ended up not using it).

My favorite shiny is hard to say; I really like Shiny Umbreon, Mothim and Ninetales.

Member
First Shiny I ever caught was a Zigzagoon in Ruby. I remember it well- I was going from Fortree to my Secret Base on Route 121. I had not yet grasped the concept of stocking up on Repels, so I was just avoiding as much tall grass as possible. Indeed, in order to get from Fortree to my Secret Base, I only had to pass through a single tile of grass. Sure enough, in that one tile, wild Pokémon. I was annoyed... until the Zigzagoon sparkled, that is.

That was well over ten years ago. I've caught many more Shinies since then. Two of them even came exactly 10 years apart- I caught a Shiny Bagon in Ruby on my 14th birthday, and a Shiny Carnivine in Y on my 24th birthday. I also caught a Shiny Lapras on my 20th birthday- 10 years, to the day, since I first started playing Pokémon, so you can see why this one holds a special place in my heart.

I currently have 138 Shiny Pokémon, all of whom I am the OT of (with one exception- the Flareon used to belong to my brother. I usually only collect Shinies that I've caught, received from an NPC, or hatched myself, but I made an exception here because I was actually present when he first SR'd the Eevee). I do not count Shinies that came from Nintendo events like Giratina or Pichu, nor do I count the Red Gyarados from the Lake of Rage (the Nature Preserve Haxorus and Benga's Gible, on the other hand, are fair game, since they require actual work to acquire, whereas the Red Gyarados is literally an unavoidable part of the storyline). My latest Shiny was a Bellossom I caught in Omega Ruby as an Oddish. It appeared in a horde while I was in the process of EV training an Emolga. I prefer Vileplume, but I had already evolved my first Shiny Oddish into Vileplume, and I wanted at least one of each.