The first Scarlet & Violet cards were revealed at Worlds in August, along with news the original “Pokemon ex” mechanic would be returning.

The original Pokemon ex mechanic ran from 2003’s EX Ruby & Sapphire until 2007’s EX Power Keepers. Pokemon ex featured greater HP and stronger attacks than non-ex Pokemon, so they gave up two Prize cards when Knocked Out. They evolved from their regular pre-Evolutions. For example, a Stage 1 Raichu ex evolved from Pikachu and a Stage 2 Blaziken ex evolved from Combusken.

The next iteration of “Pokemon-EX” was actually an entirely different mechanic, though inspired by the original because of the two Prize penalty. It was introduced with Black & White’s Next Destinies in 2012 and continued until 2016’s Evolutions. The first Pokemon-EX revealed was Mewtwo-EX in August 2011.

At first the Black & White sets only featured Pokemon-EX of Legendary Pokemon, such as Mewtwo-EX and Darkrai-EX (which are always Basic Pokemon). Then in June 2013 a Basic Chandelure-EX was revealed. This was the first time we learned the TCG would be ignoring pre-Evolutions; it was a bit of a shock to TCG fans at the time. From then on any fully evolved Pokemon would be a Basic Pokemon-EX, even if it evolved from a Pokemon in the games. For example, Blaziken-EX was just a Basic Pokemon that didn’t evolve from Combusken.

This year’s Worlds announcement revealed the original Pokemon ex mechanic will be returning. This means we will be seeing Evolution become a big part of the TCG again. At Worlds, TPCi debuted a new Stage 2 Magnezone ex that evolves from Magneton: 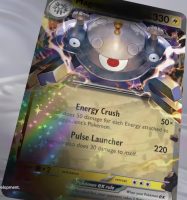 [L] Energy Crush: 50x damage. This attack does 50 damage for each Energy attached to all of your opponent’s Pokemon.

The cards have missing text which is likely Energy types. The speculative text is below in brackets.

Ability: Dino Cry
Once during your turn, you may attach up to 2 Basic [F?] Energy cards from your discard pile to your Basic [F?] Pokemon in any way you like. If you use this Ability, your turn ends.

Ability: Tandem Unit
Once during your turn, you may search your deck for 2 Basic [L?] Pokemon and put them onto your Bench. Then, shuffle your deck.

The Worlds announcement also revealed a “crystal” version of the Pokemon ex logo. This is likely going to be the TCG equivalent of the Terastallization phenomenon from the games, where Pokemon have a Tera Type that can be different from their normal types (such as a Water-type Charizard). We have no idea what the mechanic will entail at this time.

The Worlds announcement also showed Pokemon ex will have a starry “gloss” over the entire card. If it’s the same type of gloss used on Japanese cards over the years, this will be the first time English cards will be printed with this kind of effect.

The body of the card will also be slightly transparent to allow extended artwork to show through. On Magnezone you can see rocks and lightning under its attack text. The artists will illustrate the Pokemon as “full arts,” knowing the area under the Pokemon will be obscured by the card text.

No Scarlet & Violet products have been revealed in Japan yet. However, we’ve learned about them through internal listings.

In Japan we’ll be getting the first Gen 9 sets on January 20th, named Scarlet ex and Violet ex. No other information is known about them, although they’ll obviously feature the aforementioned Koraidon ex and Miraidon ex.

The sets will be accompanied by the release of three 60-card “Starter Set ex” decks. Each deck will feature either Sprigatito and Lucario ex, Fuecoco and Ampharos ex, or Quaxly and Mimikyu ex. A fourth “Starter Set ex” featuring Pikachu ex and an unnamed Lightning Pokemon — presumably a new Pokemon — will also release on March 10th.

On March 10th, Japan will see the release of its first Scarlet & Violet subset named Triplet Beat. This will be yet another “Strengthening Expansion Pack” set, which means it’s a smaller set like Battle Region, Dark Phantasma, or Pokemon GO.

In English we’ll be getting the Paldea Collections on January 6th, 2023. Each collection will come with three promos of Sprigatito, Fuecoco, and Quaxly, a jumbo card of Koraidon ex or Miraidon ex, a pin of one of the Starters, four booster packs, and a code card.

These preview boxes have released for the past few generations. Based on Galar’s, we should see six boxes pairing two sets of Starter Pokemon promos with one Legendary ex.

Based on history we expect the first English Scarlet & Violet set to release in February 2023. However, no announcement has been made yet.

And this is everything we know about the Scarlet & Violet TCG so far! We should be getting the first official set news within the next few weeks, so stay tuned!