We now have photos of the Silver Tempest prerelease promos! Except for Archeops, each of them features new artwork that hasn’t been seen in Japan yet. 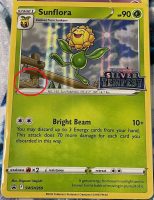 Did you notice the “STAFF” stamp on Sunflora? Staff promos will make their return with Silver Tempest! These cards have always been given out to volunteers at prerelease events.

While we don’t know why the decision was made, it may have been because of the pandemic’s impact on printing factories at the time. Later, a pair of Cinerace promos for June 2021’s Chilling Reign was discovered. This made it clear TPCi had intended to print them before something disrupted them.

Prereleases for Silver Tempest start this weekend. You can use the event locator on Pokemon.com to find one near you. You can also purchase a Silver Tempest Build & Battle Box from your local gaming store.

The set officially releases on November 11th. You can see all Silver Tempest product images and information here.