A new Pokemon from the Paldea region in Pokemon Scarlet and Pokemon Violet has been revealed in an official video entitled “Grafaiai makes its mark!” In the video, a Grafaiai is observed and discussed in the style of a wildlife documentary.

The name Grafaiai is likely a play on the words Graffiti and Aye-aye, a type of lemur native to Madagascar.

Its official description follows below: 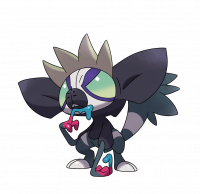 Grafaiai is a moody Pokémon with a fastidious disposition. It doesn’t form packs, preferring to roam alone, and it is constantly caught up in territorial struggles with other Pokémon. Grafaiai specializes in using its poisonous saliva—which changes color depending on what the Pokémon eats—to attack foes by spitting at them or by slashing at them after coating its claws with the saliva.

Grafaiai is nocturnal and once the sun sets it licks its hands and fingers to cover them in poison and uses them to draw patterns on the trees in its territory. The poisonous saliva it uses to paint paralyzes Bug Pokémon, which are drawn to the saliva’s sweet, fragrant scent.

An additional video highlighting Grafaiai with in game-footage was also released.

Member
This looks like a Yuka Morii clay model
D

Member
I like to move it move it
B

Member
What's lame is basing a region on a real life place and then not having many inspirations from that region. Obviously there'll always be a number of Pokemon that aren't inspired by the region, but since they make so few now (since XY), it's just a waste really.

This is based on leaks of what the new Pokemon are, not just this Madagascan lemur.

Member
Looks like it could be a dark/poison type? Or maybe even a part fairy type

Member
I like that we have an aye-aye Pokémon now, I just don't really like its eyes.

I partially agree with @bktan , but we also had a koala Pokémon, a polar bear Pokémon, and many more that did not fit into the region at all. But with the rather new concept of regional forms, if we ever get something that would include Madagascar's ecoregion, we could definitely have the "original" there as a regional form or just stating something like it comes from a different region, but was intodruced as a pet in Paldea and then from released indiviuals, a wild population established.

ProfesserPopplio said:
Looks like it could be a dark/poison type? Or maybe even a part fairy type
Click to expand...

Member
ohhh okay.. I was struggling to figure out exactly what it was from just looking at the 3d model, the stock artwork makes a lot more sense

Member
this thing is horrible lol

Member
this guy can give you the ultimate middle finger

bktan said:
What's lame is basing a region on a real life place and then not having many inspirations from that region. Obviously there'll always be a number of Pokemon that aren't inspired by the region, but since they make so few now (since XY), it's just a waste really.

This is based on leaks of what the new Pokemon are, not just this Madagascan lemur.
Click to expand...

Look up the forest of oma

I like it outside of it's eyes; not that I need anime eyes on everything, but eyes are a large part of what gives Pokemon personality; this thing, sort of like Vikavolt and the other no-pupil pokemon, feel really off-putting and hollow to me compared to something like Bulbasaur.

Member
man y'all don't seem to like anything outside the TCG. this just furthers the theory that GO and TCG fans don't actually care for Pokemon much at all

Member
Pokemon is cool. These tree textures look like ass though, is Game Freak making a Gamecube game?