Hello PokeBeach readers! It’s been a few weeks, but I am finally writing another article! Last time we talked a bit about one of my favorite archetypes in the Standard format, being Arceus VSTAR with Flaaffy and Boltund VMAX or Vikavolt V. Since then, I am displeased to say that the deck is not in a great spot anymore, largely due to the results of the European International Championships (EUIC) this weekend, but it is still one of the most entertaining archetypes in the game, and it could easily come back if the meta works out right.

Speaking of EUIC, I would be lying if I said I was anything short of astonished by the outcome of the event, and I know I am not alone in that.

Going into the event, the clear consensus was that Mew VMAX was the best deck in the format, with Arceus VSTAR / Inteleon trailing close behind. Additionally, many people expected decent results from Rapid Strike Urshifu VMAX decks built like Robin Schulz‘s deck from Liverpool Regionals, but I am reasonably confident that nobody could have predicted the Top 8 that we got. Going into Top 8, these were the standings:

Honestly, I’m not sure what is more unbelievable, the fact that there was a Whimsicott VSTAR deck in the Top 8 or the fact that there were six decks that played at least one copy of Rapid Strike Urshifu VMAX, with one of them winning the event in the hands of Gustavo Wada. Additionally, the Whimsicott VSTAR made it to the final of the event in the hands of Frank Percic, but due to some rough draws in the final, Percic fell short of being the International Champion. While these decks were the standout stars of the Top 8, however, one more deck caught a lot of people’s eye during the first day of competition, and that was the deck played by Sander Wojcik. 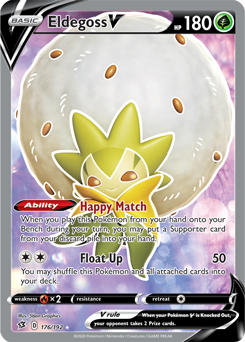 For those unfamiliar with Sander, he is best known for building a variety of stall and control decks. Over the past few years, he has been at the forefront of developing some of the more well-known stall and control engines, in addition to developing entire archetypes. In Liverpool a few weeks ago, Sander played a fairly traditional Zoroark Toolbox Control, which has been the go-to option for the majority of the Sword and Shield-on rotation. A while ago, however, Sander proposed a new idea, which was an Eldegoss V loop thanks to the release of Double Turbo Energy in Brilliant Stars.

Previously, Eldegoss V loops were simply unrealistic, requiring two attachments, but now that there is a way to power up Eldegoss V with a single attachment, a plethora of new options has opened up. In his proposition, Sander suggested shifting between a VMAX with a Retreat Cost of zero, such as Togekiss VMAX, and an Umbreon VMAX with Moon & Sun Badge so that you cannot be affected by Boss's Orders. By doing this, you can set up a loop so that you play Cheryl every other turn, creating a perfect loop where (as long as your opponent cannot do 310 damage with a single attack) you will never be Knocked Out.

Following Sander’s proposition, several other players, including Jake Gearhart, created their own versions of the strategy, but none of them ever panned out, being too inconsistent, too convoluted, or in some cases, too easy to Knock Out. Leave it to the inventor to come up with a way to finally give the deck its time to shine, with a 39th Place finish at EUIC.

Unlike most of Sander’s deck lists, this deck actually has a surprisingly low number of tech cards, largely due to it having a central strategy rather than having to be teched to beat a variety of matchups. Sander decided to slightly adapt his original plan of using two different VMAXs to instead focusing on Umbreon VMAX and attaching an Air Balloon on one of them. Alongside the cards contributing to the core strategy, there is a lot of Energy Disruption, such as Yveltal and Flannery, Ability Lock in the form of Jolteon, and some unique consistency tools like Starly and Jirachi.

Typically, I would go straight into explaining why certain cards are in the deck list, but I felt that, given this deck’s unusual nature, it would be best to also explain the goal of the deck a bit more.