Hello to all PokeBeach readers! Here’s Gabriel Semedo again with another Pokémon TCG article, and this time I’m going to talk about Arceus VSTAR / Crobat VMAX, which is basically an improved version of the deck I used at São Paulo Regionals and also the deck I used to win the flying ticket to Joinville Regionals in a tournament last week. 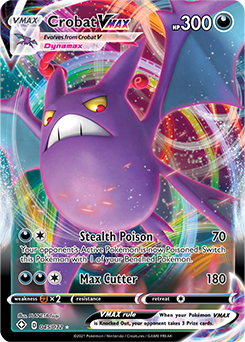 To begin with, I will briefly talk about my participation in São Paulo Regionals, which unfortunately wasn’t the best. On the eve of the competition I decided to change decks, leaving my Arceus VSTAR / Inteleon safe option in favor of the more unique Arceus VSTAR / Rapid Strike Urshifu VMAX / Crobat VMAX list, which was initially shown to me by my teammate Dalton Acchetta. Nowadays I don’t consider the deck a good choice, but at the time of São Paulo Regionals, it was excellent — so much so that Dalton managed to reach Top 8 with the same sixty cards I used. I ended up with a much less exciting 38th place, with a record of 6-3-0. Top 64 still get points and a booster box, but I knew I could have gone further, and now my goal is to do better at my next Regional Championship in a few days.

For Joinville, I want to continue playing with a similar Arceus VSTAR list, but now forgoing Rapid Strike Urshifu VMAX in favor of more features and consistency. There were a lot of things I liked about the list I used, like the Battle VIP Pass, which fixed one of the biggest consistency problems I had been facing with Arceus ever since its launch. Another plus was Crobat VMAX, which helped a lot against Mew VMAX and Malamar.

I have been working on this list for over a month, going through several tests and updates. In the end, the list is surprisingly simple, but it has more than enough answers to deal with the metagame’s main threats, including Mew VMAX, Arceus VSTAR, and Rapid Strike Urshifu VMAX.

Even accounting for metagame changes, Arceus VSTAR remains one of the best attackers in the game today. With 280 HP (310 with a Big Charm attached) and an attack capable of Knocking Out virtually any Pokémon V after Choice Belt and Galarian Zigzagoon, it has everything it needs to be a top player. Meanwhile, Dunsparce and Cheren's Care greatly increase its defensive capabilities and make it a true force to be reckoned with.

To tech a Pokémon into an Arceus VSTAR list, it really needs to be worth it, as in most cases the best option will simply be to further support your Arceus VSTAR. In the case of Crobat VMAX, however, it ends up being much more than a simple tech. First, the Basic Crobat V is a necessary resource in Arceus decks to help find an Arceus V and an Energy on the first turn, so that by the second you can start executing your main strategy. And furthermore, Crobat VMAX is the ideal tech against Mew VMAX, because its bulk is comparable to Arceus’s and its attack can one-shot a Mew. Often the matchup against Mew VMAX is decided by Path to the Peak, but having Crobat VMAX on your side improves the matchup considerably.

There are other viable tech Pokémon too, like Hoopa V to help against Rapid Strike Urshifu VMAX or against Mew when part of your Crobat line ends up in the Prizes. The list also has the space for a Galarian Zapdos V and two Fighting Energy, but between all the single-Prize support Pokémon, it doesn’t need it.