Hello to all PokeBeach readers! Here’s Gabriel Semedo again with another Pokémon TCG article, and the subject this time is  practically the only Fire-type deck in the metagame: Victini VMAX.

Since Welder, Giant Hearth and several of the best Fire Pokémon were rotated last season, the format has been lacking in Fire-type decks lately. It’s difficult to play Fire-type Pokémon without any Energy acceleration and depending only on conventional Supporters. Victini VMAX, however, is a special case.

Requiring only two Energy to attack with no other major requirements, Victini VMAX is so easy to use that it doesn’t even look like a typical Fire Pokémon. In fact, it requires so little upkeep, it’s even possible to combine Victini VMAX with Pokemon of different types, like Galarian Moltres V, or Suicune V with Melony.

The list I will analyze here today explores Victini VMAX’s independence, focusing more or less entirely on Victini VMAX alone. The list also has Talonflame V, which serves to bring a little more security and stability in the first turns of the game, taking advantage of its free retreat cost and its Fast Flight attack to draw cards. 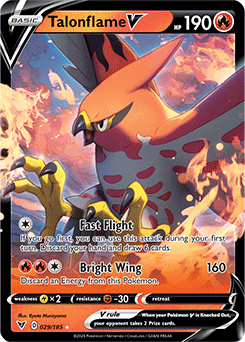 Talonflame V is a novelty in Quad Victini VMAX lists. The idea is to have another good starter option, as its free retreat cost allows you to switch easily into Victini VMAX on the second turn, and its Fast Flight attack lets you refresh your hand even if you’re the one going first. These small details make all the difference. The early game for Quad Victini VMAX decks can be very problematic, and depending on the list you are using, it won’t be uncommon for you to lose games early on. Talonflame V is far from a perfect starter, but it’s better than it looks, and it will keep you from losing a lot of games. A final advantage in using Talonflame V as a setup Pokémon is that it doesn’t rely on an Ability, and so it works very well with Path to the Peak.

I must also mention its Bright Wing attack, whose main function is to Knock Out the single-Prize Pokémon that Victini VMAX otherwise struggles with. Thanks to the 160 damage from this attack, Inteleon CRE, Inteleon SSH, and several other top single-Prize Pokémon no longer present the problem they used to. The Weakness to Lightning is another advantage, as it lets Talonflame V withstand at least one Aqua Bullet from Inteleon SSH.

The idea is to develop at least two Victini VMAX as soon as possible, but having three or four can be a powerful advantage depending on the matchup. In addition to having an attack with one of the best benefits for the cost in the game, 310 HP — while low for a Pokémon VMAX — is enough to withstand almost any attack in the game, too. A few isolated cases like Mew VMAX with four Power Tablet or Single Strike Urshifu VMAX can Knock Out a Victini VMAX in one hit, but normally you’ll be able to soak up damage and pivot between your Victini VMAX all game, using Cheryl to heal as needed.