Recently I won an online tournament with a card that’s never before had competitive success: Duraludon VMAX. This ended up warping the short-term meta more than I would have guessed. Some decks, such as Ice Rider Calyrex VMAX and Gengar VMAX, started playing more basic Energy and Path to the Peak in subsequent online events. However, even with those developments, the deck still has incredible matchups across the board. Now that the deck is a known quantity, Duraludon VMAX’s popularity ebbs and flows, and some individual tournament metas will be easier than others.

In any case, today I’ll tell you everything you need to know about the newly-emergent Duraludon VMAX archetype! It’s a bit different than the other decks out there, so it should offer a nice change of pace and great matchups. The deck has been developed primarily by a player who goes by the name fryeguy, to give credit where credit is due. After seeing their list in an online event, I changed a few cards and played it to a 1st place finish at a 130 person online event. My current list is one card off of my tournament-winning one, so I’ll be sharing the current best iteration with you all today. 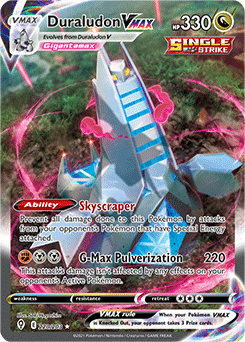 Welcome to the heavy metal hotel! This is basically an anti-meta deck. There was originally another Zamazenta V, but Zamazenta V is actually more of a liability, even in matchups where it looks good like Jolteon VMAX and Mew VMAX. It’s mostly just useful against decks like Leafeon VMAX and Shadow Rider Calyrex VMAX. Zacian V is not for attacking most of the time. The star of the show is Duraludon VMAX itself. Duraludon V‘s Ability is quite helpful because it makes it so that it’s less likely to be sniped off by stuff like Umbreon VMAX and Mew VMAX before it evolves. Your ideal setup is two Duraludon VMAX and one Zacian V to help set up. Zacian V will go down at some point, especially if it’s offered as fodder in the Active Spot. Either way, opponents will be forced to fight through two VMAX. Zamazenta V interferes with this setup, which is why it’s sometimes a liability. Fortunately, it’s also quite bulky, so starting with it isn’t the end of the world.

There’s no Energy acceleration besides Intrepid Sword, so we’re powering up Duraludon VMAX the old-fashioned way. This sounds too slow to be viable, but it’s actually fine. Adventurer's Discovery makes its competitive debut in the deck, despite being a card that’s typically too slow in the current format. It allows us to search out everything without requiring the awkward inclusion of Evolution Incense. This is much like how 2019’s Pidgeotto decks played Professor Elm's Lecture as their only way to search out Pidgeotto. In both cases, the Supporter is the Evolution search, but it also finds other cards and alleviates the need for a dedicated Evolution search card.

This card looks like a strange inclusion for something that, for one, can’t easily be searched, and two, in a deck whose Pokemon aren’t often KO’d. However, this deck is able to see a lot of cards via draw Supporters, Intrepid Sword, and CARD NOT FOUND. There’s a very reasonable chance that you’ll see Raihan on a turn where it’s usable, and it can potentially turn the tide of the game. Not only is it a form of Energy acceleration, but more importantly — Energy recovery. Sometimes you’ll be on the bad end of some opposing Crushing Hammer, and the recovery plus Energy acceleration can really help out. And of course, searching for any card is an amazing utility as well.

Yet another quirky inclusion is Flannery. Flannery may seem counterintuitive since it discards Special Energy which is at odds with Duraludon VMAX’s Skyscraper Ability. However, Flannery is a versatile card with several uses. Discarding Special Energy is situationally useful, particularly against Mew VMAX and Meloetta, as well as other fringe edge cases. Furthermore, Flannery acts as a Path to the Peak to the counter, giving more outs than just the four Crystal Cave. Moreover, it’s a Path to the Peak counter that’s searchable via CARD NOT FOUND. Finally, Flannery can bump an active Crystal Cave, which can be good if you have another one in hand. This allows for some extra healing, which is a tactic often employed against decks without Stadium cards — such as Suicune V. Remember that you can’t play two Stadium cards in one turn, so you can only get the double Crystal Cave healing if one was already in play from before.