Hello PokeBeach readers! Isaiah here once again, happily writing another Standard format article for you all! Last time, I looked at the brand-new Mew VMAX / Genesect V deck through the lens of my event-winning list. Now, a few weeks after the release of Fusion Strike, there have been several more online tournaments, giving Mew VMAX more time to prove its strength, which it has done in amazing fashion. As of writing this, Mew VMAX / Genesect V is the most popular deck in Standard, with over 300 tournament plays to its name (one of only two decks that can say this!). Of the decks that even have over 100 plays, Mew VMAX / Genesect V has the highest win rate of them all, sitting at a comfortable 54% — and if that weren’t enough, Mew VMAX / Genesect V is currently the only deck in Standard with over 1000 wins, which is especially remarkable considering the deck has existed for less than two weeks. In that time, Mew VMAX has evolved quite a bit, with some lists starting to include Rotom Phone, Galarian Articuno V, and more, all to work out the most consistent builds possible.

At the same time, many other players have tried a variety of options to try and take down the growing powerhouse that is Mew VMAX / Genesect V. Some notable options for this include the classic Suicune V / Ludicolo, which is great for taking essential one-hit Knock Outs on Mew VMAX while they typically fill their Bench; Zacian V / Zamazenta V, which can have burst-damage options and wall out a Mew VMAX with Zamazenta V’s Dauntless Shield; and many other decks. One option that is at the forefront of the format’s anti-Mew VMAX options is the set of classic Single Strike archetypes, which are the centerpiece of today’s article.

What’s up with Single Strike? 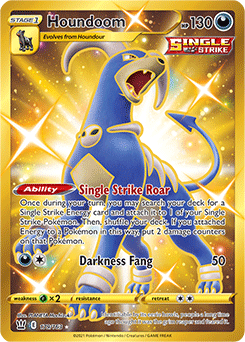 Dark Signal is highly reminiscent of Luxray GL LV.X‘s Bright Look, which is one of the best Poke-Powers ever printed; Houndoom continues to provide great Energy acceleration; the deck is easily capable of hitting 220 thanks to Single Strike Energy alongside the natural power of Single Strike Urshifu V and Umbreon VMAX; and, most importantly, Single Strike Urshifu VMAX and Umbreon VMAX together produce one of the most powerful type combinations in the game’s history. Looking at the past, Darkness and Fighting first teamed up and saw success at the 2004 World Championships with Tsuguyoshi Yamato’s Team Magma deck, featuring Team Magma's Groudon. Fast forward to 2012 and we see a powerful Darkness and Fighting deck take down the World Championships once again, this time a Darkrai-EX / Mewtwo-EX / Terrakion deck piloted by Igor Costa. Now, in 2021, the Darkness and Fighting combination proves to be as formidable as ever thanks to its incredible offensive coverage. With this working in its favor, it should be no surprise that Single Strike Urshifu VMAX / Umbreon VMAX is the second-most popular deck in Standard, with over 300 plays in the two weeks since the release of Fusion Strike, and a win rate of about 51%.

Now that I have addressed the two different types of Single Strike decks, let’s take a look at deck lists for each of them. First, we will look at Gengar VMAX paired with Houndoom and Inteleon.

As I said earlier, I think Gengar VMAX is the weaker of the two decks that I will be talking about today, but that does not mean it’s a bad deck. In fact, it’s quite a good deck! The most notable upside to Gengar VMAX is that it represents the best of both Single Strike worlds, offering both the typing of Umbreon VMAX and the damage output of Single Strike Urshifu VMAX. Putting both of these on one card creates a monstrous powerhouse that can blow through many of the top attackers in the format.

In addition, Gengar VMAX takes way fewer resources to attack than other Single Strike Pokemon do. As a result, Gengar VMAX can play the Inteleon engine, which opens up some crazy options when Quick Shooting and Shady Dealings join the power of Single Strike. This list is based off of one used by Azul Garcia Griego to win a recent online tournament.

We run a very traditional four Gengar V and three Gengar VMAX for the same purpose as always: consistency. In this deck, Gengar VMAX is the main attacker, and we should be using it almost all the time. While Fear and Panic is a solid attack that typically offers easy two-hit Knock Outs thanks to damage boosts from Single Strike Energy, we will mostly be using G-Max Swallow Up thanks to its massive damage output. With 250 base damage, it has enough raw firepower to take a one-hit Knock Out on most Pokemon V. With a single copy of Single Strike Energy, G-Max Swallow Up can take that Knock Out even if they have a Cape of Toughness attached. And in the next major HP bracket, G-Max Swallow Up can still hit the big numbers, albeit with a slightly heavier commitment of three Single Strike Energy to hit 310 or four to hit 330.

This brute power is the root of the deck’s allure, especially when compared to decks like Single Strike Urshifu VMAX / Umbreon VMAX, which rely more on taking one-hit Knock Outs on Pokemon V and two-hit Knock Outs on Pokemon VMAX. Another attacking option that should not be overlooked is Gengar V, which can do 190 with its Pain Explosion attack — an amazing number for a two-Prize Pokemon, as it lets you trade evenly with Pokemon V that you could otherwise struggle with, such as Suicune V or Zamazenta V.