Hello to all PokeBeach readers! Here’s Gabriel again with another Pokemon TCG article. Today I’m going to tell you about my experience with Pikachu V-UNION, which I tried with two different lists — one with Rayquaza VMAX and the other with Tapu Koko VMAX.

Before I begin, I want to make it clear that no Pokemon V-UNION is really competitive in the Standard format (including Pikachu V-UNION) because unfortunately the difficulty of bringing this Pokemon to the field is difficult and its strength doesn’t make up for all the effort. I confess that I’m an optimistic player and I believe that when new cards are released in the future, like maybe the return of Ultra Ball, the task of throwing the four parts of a Pokemon V-UNION into the discard pile becomes a little easier.

With the SSH-EVS format coming to an end and the metagame finally stabilized (by the way, if you haven’t seen my last article, in it I do an overview of the current metagame with more than ten lists and a lot of content) I felt that now would be a good opportunity to talk about something I’ve been avoiding lately, Pokemon V-UNION. To be honest, my idea was not to play with any Pokemon V-UNION for now, but something unusual happened and when I went to see it. I was already doing tests with the new Pikachu V-UNION. Thanks to the tests with Pikachu V-UNION I managed to extract some knowledge that is valid for all the Pokemon V-UNION we currently have, so I plan to do tests with all the other Pokemon V-UNION over the next few days, while we wait for Fusion Strike to come out. Let me tell you my experience with Pikachu V-UNION.

Why Are Pokemon V-UNION Bad? 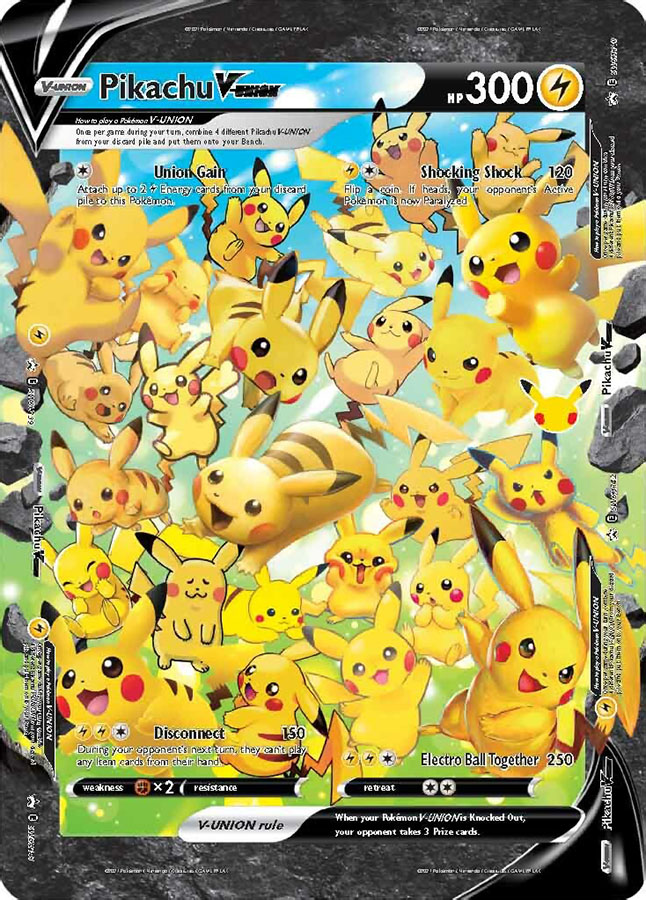 It took a few days after the release of the first Pokemon V-UNION for players to test and realize that these Pokemon cards would hardly have a chance in the competitive Pokemon TCG scene. The problem is not the strength of these Pokemon, quite the contrary. I think they are all good, but the negative impact that these four cards have on the deck in terms of consistency, added to the lack of good cards to search for these Pokemon make it difficult for Pokemon V-UNION to be competitive. In the end, the effort to bring in a Pokemon V-UNION doesn’t pay off. What I learned is that Pokemon V-UNION are strong, it all depends on the speed and ease with which you can do this in a game.

Another recurring problem is when one of the parts of the Pokemon V-UNION goes into the Prizes. In this case it is necessary to use Peonia, but there is still a major luck element involved as Peonia allows you to look at only three of your six Prizes. Also, Peonia is a Supporter, which despite not being as bad as it sounds, there are still all the difficulties of a Supporter, such as you can only use one per turn.

It’s impossible not to mention how difficult it is to discard the four parts of a Pokemon V-UNION in the time that the current format requires. A lot of this is due to the first mentioned reason, which is the lack of good cards to search for Pokemon V-UNION in the deck. I don’t know if “difficult” is the right word, but in competitive Pokemon TCG, by the second turn you need to have a good setup and be attacking with your main Pokemon. Unfortunately, the average number of turns I needed to bring Pikachu V-UNION onto the field is four turns, By then, it becomes the last attacking Pokemon, when the opponent has already managed to take some Knock Outs.

Why Am I Trying Pikachu V-UNION?

It all started while I was livestreaming, playing with some not very competitive decks like Rayquaza VMAX and Glaceon VMAX, it was then that one of my viewers, known as Alemão, decided to send me some cards on PTCGO, some of them being the four parts of Pikachu V-UNION. As I said, I had never played with any Pokemon V-UNION because after watching some videos on YouTube I realized that it was too difficult to bring these Pokemon onto the field with the cards we have in Standard format, plus they were too expensive to get on PTCGO when it was new.

Since I was given a complete Pikachu V-UNION, I started experimenting with some ideas for a deck. The first list presented in this article is the version with Rayquaza VMAX, which despite not being as consistent as the other, manages to bring Pikachu V-UNION a little easier and faster to the field. The second list was made together with another player, Paulo “Sombrinha” D’Oliveira, who was also a spectator during my tests with Pikachu V-UNION and decided to do try bringing Cinccino instead of Rayquaza VMAX to offer consistency and help with the discards of V-UNION cards.

During my tests, games with Pikachu V-UNION were increasingly fun and I realized that my audience not only liked to see this Pokemon being used in matches, but also helped with ideas and suggestions. This experience was very interesting in relation to the creative process, as everything was only possible because of my livestream. The result of all this are two deck lists created with the help of several viewers, people that I haven’t even had the opportunity to meet in person yet.